Seeds Of The future 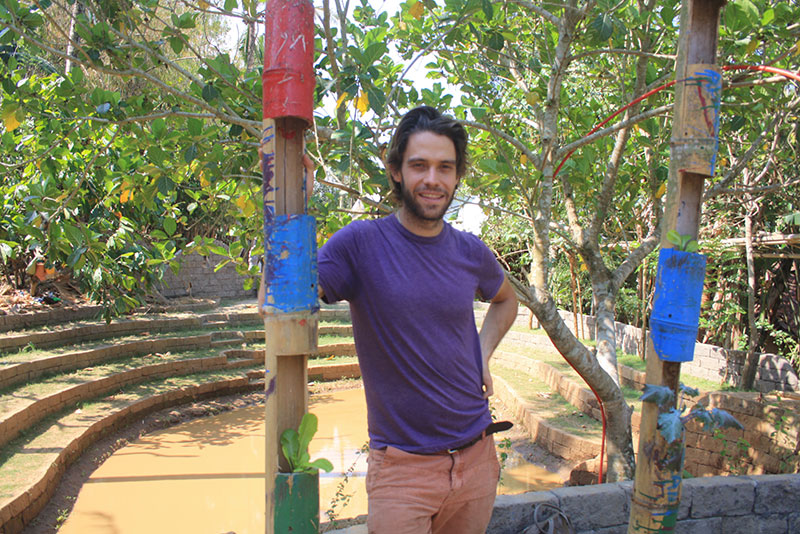 “Hey Orin,” I asked as we made our way back up to The Heart Of School having just shown Dr Vandana Shiva what we are doing in the Green School Gardens,”I’m wondering if you felt like that moment might have been a tipping point for you?”

“What do you mean?” he replied.

Vandana Shiva had just been telling the school what the world should be doing and – to me – here was the perfect embodiment of it!

If the world was to weather the vicissitudes of climate change it was imperative the local farmers embraced biodiversity and reclaimed their ancestral seeds from multinationals and their rapacious patents.

“Yeah, I suppose you are right, it did feel like we’ve achieved something; like we had something to show,” he said in his usual modest tone.

For me, I told him, it had been a goose bump moment. Especially when GreenCamp director, Melissa Abdo, told Dr Shiva of how once cynical locals in the area were now showing our Green School gardeners new found respect for their work as organic gardeners.

And it had been great to see our head gardener, Yohannes, brimming with pride as his team showed off the organic vegetables and medicinal plants now grown on the property.

For Orin, it marked the end of stage one of a long-term idea he has had since his father anchored the first bamboo pole back in 2008.

Borne of his own childhood memories growing up in nature on the outskirts of Ubud, this plan stretches way beyond the school lives of children now in kindergarten.

He looks forward to lending his vision to the new GREEN PLAN for Green School. This plan not only provides the perfect learning environment for the school’s Green Studies programme with the GreenCamp gardeners working side by side with the kids, but also ensures the sustainable management of the land upon which Green School and GreenCamp sits.

Ever since college Orin says he’s been fascinated with providing answers to one question: why is there such ecological dissonance between man and the environment?

From a young age he remembers “always being fascinated with making life out of life: how if you took two chickens they magically turned into more chickens.”

When he was 12 he remembers putting cyanide into the subak, a technique that was practiced by locals to capture fish because it forces them to the surface, stunned and lacking oxygen.

“I remember realising there weren’t as many fish in the suback system to scoop out after that and I remember feeling really guilty,”
he says.

Soon afterwards he went to school in New York and then Australia before ending up at Maxwell International Baha’i School in British Columbia.

He returned to Bali in 2007 and got to work with Jorg Stamn on the building of Green School.

“As a teenager”, he says, “I was depressed with all I saw in the news about how horrible everything was.” He was thankful when mentors such as James Stark and Penny Livingstone came properly into his life.

“James had been at Art School with dad, at that time he was at the cutting edge of permaculture and regenerative design. He was the one who convinced dad to move away from ornamental and landscaping plants at the jewellery factory.

As a result, Orin went to study permaculture in Northern California.

“I’ll never forget the summer I came home from school and dad told me he was going to build a school that was going to change the world. He’d already started getting into bamboo.”

The environment movement, then, had all been about conservation and “I couldn’t see how this included humans as a part of nature.”

“It had always been an adversarial relationship. What I love about permaculture is it sees humans as an opportunity to enhance the natural world.”

Not ready to return to Bali for good, Orin went back to the U.S to get a degree in Environmental Studies at The Evergreen State College, and then spent a year doing a Regenerative Design and Nature Awareness course at the Regenerative Design Institute.

He returned to Bali in 2012 and became involved with the Green School gardens at the end of 2013.

Since then, with support from GreenCamp under the direction of Melissa Abdo, Orin’s vision for a healthier, productive and diverse Green School garden has begun to grow, production has risen and there are more varieties of heirloom and open-pollinated seeds than ever before.

The garden teams have been formed based on their areas of expertise, a composting station has been developed,a long term nursery set up, the subak has been opened up and a rotation system for cows, pigs and chickens is in place. There are now plans for additional fencing.

A document outlining the process for future infrastructure is now underway with plans for increasing food production to supplement the needs of the Green School kitchen and new Farm Stand.

“I want us to plant more annual vegetables and sustainable tropical perennials and to preserve the medicinal, heritage and heirloom seeds“ Orin says.

“We also need to address the rhinoceros beetle and coconut tree problem.”

The land is here as a learning platform for locals and foreigners, for teachers, children and community to connect to nature, he says.

“I hope that people will come here not only for the building and education concept, but also for the quality of the gardens’ sustainable systems.”

It is great to see the students working alongside the gardeners, he says.

“I look forward to the day that Green School students know more about the garden than me.”