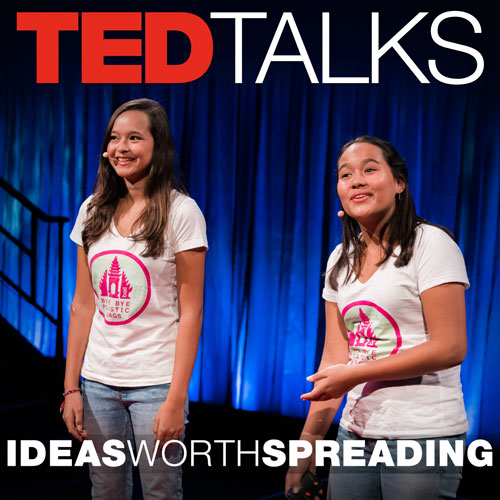 I am so proud of these girls! This is the type of action I dreamed would happen when Cynthia and I first created Green School.

With these words, John Hardy, alongside a government official, opened up a wonderful evening that saw more than 150 people gathered o watch the premier of the first ever TED talk by Green School students.

Last September, during TEDGlobal>London, Melati and Isabel moved their audience as they told the story of their ongoing quest to stop the use of plastic bags in Bali. Usually referred to as paradise, the island of the gods has fallen victim to its own beauty and is now facing ecological catastrophe. With millions of visitors flooding the island each year, Bali is now producing 680cubic meters of plastic garbage every day and is soon becoming, as the girls put it, a lost paradise. Not wanting to be bystanders to the destruction of their homes, the two young activists, inspired by one of their teachers, decided to start a movement they named “Bye Bye Plastic Bags”.

Together with all of their friends, they went out to gather signatures and organise beach clean ups. And, it took a hunger strike from the two sisters to do so, but they manage to land a meeting with the Governor of Bali, Bapak I Made Mangku Pastika, and convince him to join their cause. Recently, he committed to rid the island of plastic bags by 2018. Three years after they began this journey, Melati and Isabel, 14 and 12 years respectively, received a standing ovation from an audience full of awed TED adults. But, it doesn’t end there.
There is still al lot of work to be done. They just hope this talk can be a gateway of inspiration for all the youth of the world because “even though us kids only consist of 25% of the world’s population, we are 100% of the future”. They want to show that children don’t have to wait to grow up to be that change the world needs. With perseverance and a good group of friends, anyone can do anything. “We’re not telling you it’s going to be easy. We’re telling you it’s going to be worth it.”

In less than 24hrs, their talk has already hit more than 100 thousand views and the governor of Bali has vowed to use the video as a tool to promote and socialise the no plastic regulation. It goes without saying that they have a very special message to share. So please, listen to what they have to say, get inspired and say NO to plastic bags.