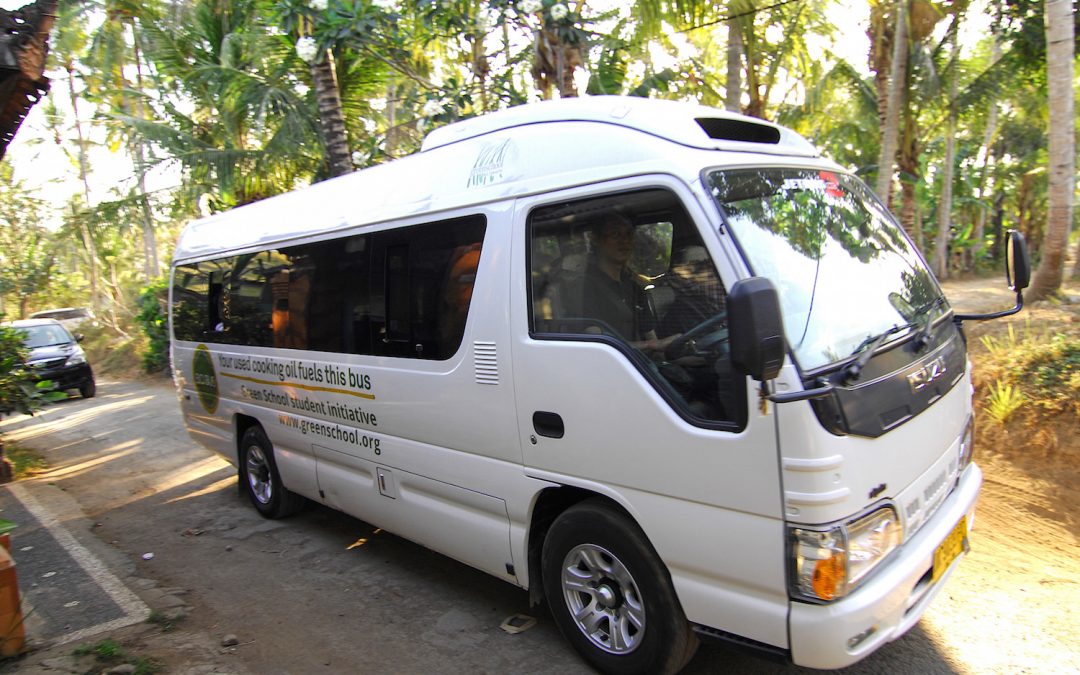 We hear a lot about the negative effects of our energy habits, from oil spills to climate change, but what do we know about the impacts of renewable energy? The Green School student-led Bio Bus enterprise has made some unexpected discoveries in how biofuel affects the environment, public health, government, schools, and yes, even our hand-washing-habits.

Environment
With regards to the environment, Indonesia’s energy consumption has grown 43% over the past decade, with transportation being a primary contributor to CO2 emissions. At Bio Bus’ recent, historical Ribbon Cutting Ceremony for Indonesia’s first publicly accessible Biodiesel Pump Station, the students announced, “the use of biodiesel B(100) for [Green School’s three] buses has taken approximately 8 tonnes of carbon dioxide out of the atmosphere and 30-40 vehicles off the road.” While it may seem like a drop in the ocean, Bio Bus is pioneering a new way of fueling transportation with biodiesel from used cooking oil with partners Yayasan Lengis Hijau.

This method reduces greenhouse gases by 86% compared to petrol-diesel, according to the EPA’s Renewable Fuel Standards Program Regulatory Impact Analysis, released in February 2010. In addition to burning cleaner and keeping the air clean, Bio Bus has discovered an additional health benefit to repurposing used cooking oil!

Health
In Bali, and all over the world, the sale and consumption of used cooking oil as a cheaper alternative to new cooking oil is causing health issues as severe as cancer. By creating a more purposeful and healthy use for the used oil, Bio Bus has led local restaurants and shops to no longer use old oil and instead, properly dispose of it by contributing it to Bio Bus. While this has started as a local initiative, Bio Bus hopes to increase public awareness and government attention to increase the demand for used cooking oil for fuel with this petition (you can sign it here!).

In addition to supporting healthy eating, biofuel also promotes hygiene with its glycerine byproduct. Bio Bus converts the by-product into value-added products such as Bio Soap. The crude glycerin generated from biodiesel production, which is impure and has little economic value, is used to make liquid soap, bar soap, candles and body lotion in our science classes.  These are then sold to further develop the Bio Bus social enterprise.

Government
In 2009, Indonesia made an emission reduction pledge at the Copenhagen U.N. Climate Summit and laid out a program to increase the amount of biofuel on the market. However, Indonesia is struggling to meet many of their goals including the 2016 mandate to have the 20% biodiesel with 80% petroleum blend (B20) at all filling stations. To increase the progress, in October 2015, The Ministry for Energy and Mineral Resources chose Bali to be the center for the development of clean energy in Indonesia. It was selected as the home of the pilot project due to its geographical size and infrastructure and it is intended that in three years time, Bali will be the first province to produce its own clean energy. As a student-led enterprise, Bio Bus is proud to be one of the leaders in the renewable fuel industry.

Indeed Bio Bus is blazing the trail for renewable transportation in Indonesia (owning and operating the first B(100) Public Access Pump Station), but biodiesel has been going on internationally for decades. What sets Bio Bus apart is how it is run by students.

Schools
Other students from around the world have picked up on Bio Bus’ press coverage and awards, like Green School’s ASEAN Energy Award, and have started asking how they can replicate the enterprise model at their own schools. So, in true Green School fashion, Bio Bus is spinning its wheels on how to help other students achieve fossil-free independence. The Executive Director of No Planeta B and Parent of the American School of Lima, Peru has recently reached out to us and said, “I have been an admirer of your school (follow your news and innovative ideas) and would like to collaborate to replicate Bio Bus … This is something all schools should be able to replicate.”  The University of Kansas in the USA has also caught wind and is interested in creating sister programs with their biodiesel initiative.

Without the community’s green spirit, dedicated biodiesel producers, a wise Board of Directors, and passionate students, Bio Bus would not have changed the way 100 families commute and over 150 students learn at Green School. Bio Bus is proud to be the greenest transportation in Bali.

Take a look at the Bio Bus handbook that lays everything out in a Problem > Solution > Next Step format.

You can also watch the Bio Bus team speaking at TedXUbud 2016 here.