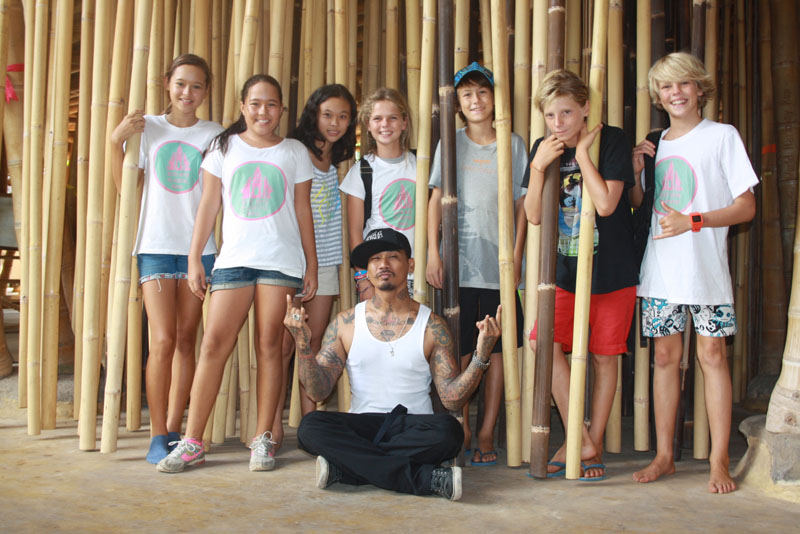 The Bye Bye Plastic Bags message to the government is hitting home.

This month, the 11 and 13 year old sisters spearheading the campaign gave an awesome Pecha Kucha about their plight to rid Bali of plastic to an international audience in Ubud. The team have gotten the banjars behind them, they did a clean-up of Kuta Beach and invited the biggest rock band in Bali to meet and support them at Green School.

And, the front man and drummer of that band, Superman is Dead, Jerinx, “can’t wait” to get the band’s 5 million Facebook followers behind the BBPB campaign.

According to Jerinx, a long time eco-warrior, he’d been wanting an opportunity to come and visit Green School for a long time, so when he heard about our girls, Melati and Isabel Wijsen, and their team of students of the school, he got on his bike and made it out to our jungle campus to meet them.

Change is a good thing, says Jerinx, but with it comes a responsibility help.

Bye Bye Plastic Bags Sisters, Isabel and Melati, blew the audience out of the water with their Pecha Kucha talk at Betelnut in Ubud

As he states on the Superman Is Dead official website: “Our desire for change, for the better, shall REMAIN our eternal spirit, and anarchy as the trigger.”

“We use the desire for change as the liberation channel …to transform to an advanced form of love to help our home (Bali) from cultural, environmental, economic destruction. The fight against such catastrophe has become an effective stimulant for the band’s songwriting process,” he says.

In many ways Jerinx’s punk rock pedigree represents the changing face of Bali with its modern attitudes and international reach. He told the team it was the way in which “change” happened that mattered.

He applauded the team for remembering where they are.
“You don’t need to come from Bali to love Bali,” he says.

“It is what is in your heart that matters. It is an essence. It doesn’t matter if you don’t go to the temple to make offerings a 100 per cent of the time or dress in traditional costume. That is not what defines whether you are Balinese or not. It matters that you respect where you are, and don’t trash it.”

“Bali is small and rich and it needs to find a balance. Money can be blinding and can destroy. We need to protect the social culture and make sure the locals always have a place. That is what these kids are doing. They are such great ambassadors and they present themselves so well. I really want to help this cause.”

Superman Is Dead started in 1995 self-producing their albums and gaining a small cult following but when the Bali bombings happened in 2000 their strong social messages led them to greater recognition in Java and overseas.

They were then signed by Sony International. Eight albums later and countless international tours, the band is taking its conscience to the world.

As Jerinx left Green School to go and see how plans for his new Eco-smart home on the south of the island were going, Superman’s mission to help BBPB felt very much alive!