UN Peace Messenger and the Spreading of Wings 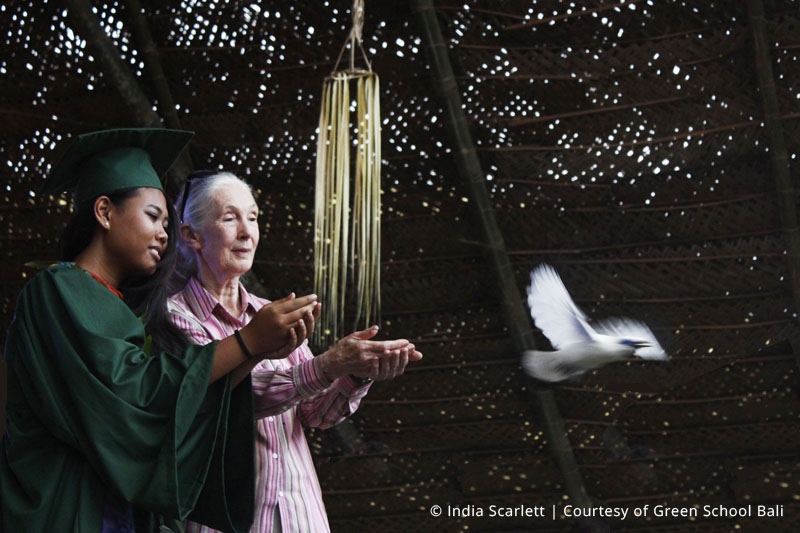 The moment marked the end to a seminal four days at Green School in which the honoured British author, primatologist, ethologist and anthropologist gave one public lecture and one graduation keynote address, hosted an exclusive coffee morning and special fund-raising dinner, presented at two press conferences, and spent a day meeting with all the students of Green School.

The children showed their appreciation at a special assembly when they performed a song, especially written for her called A Tribute to Dr. Jane Goodall, DBE: Roots Go Down

Dr Goodall was in Bali to promote her Roots & Shoots Programme and spread her message of hope. The theme of all her talks centred around the premise “everyone can make a difference every day”.

The planet is in a perilous state and it is this generation of children who will, and can, change the world for the better.

“We can all make an impact,” she says, “and we all have a choice about the impact we want to make.”

The Roots & Shoots Programme, of which Green School is a part, is now in 126 countries with over 150 000 active groups doing what they can “to put it right”.

This success is testament to her “obstinate” character which she says means “she never gives up”.

Each of Dr Goodall’s presentations were layered with anecdotes which, despite her lilting unassuming very British delivery, culminated in a deliberate call to arms.

She spoke of how her time in the hen-house as a child taught her the patience required for scientific observation, of the love she had for Doctor Doolittle, who could speak to the animals, and of how “Tarzan had married the wrong Jane”.

She acknowledged how lucky she was to have a wonderful mother, who had encouraged her to go to Africa to take such risks while living with the Chimpanzees of Tanzania.

Good parenting is another recurring theme in her message. The importance of good mothers was borne out time and again in her animal studies, especially the chimps, she says.

Dr Goodall spoke of her mentor, Louis Leakey, Kenya’s National Museum Director, who funded her research in Tanzania and later her Cambridge degree in the 1960s, as well as the other important teacher in her life, her dog Rusty.

Rusty had taught her animals did have emotions and personalities. This knowledge had given her the strength to stand up to the Cambridge establishment who criticised her for anthropomorphising the chimps under her watch.

In 1992 she had her “Road To Damascus moment” when she attended a conference in Gombe Stream National Park. She learned about the extent of the devastation happening in the African environment with regards to the degradation of its land and animals.

“I left the conference an activist,” she says.

She feels a sense of shame and desperation as a member of her generation, having caused such destruction, she says.

And yet, Dr Goodall, ended every one of her speeches by saying there were still reasons for hope.

“There is still time. The problems of poverty, the energy of the youth, the human intellect, the resilience of nature and the indomitability of the human spirit… is what inspires me every day.”

It is the children who will change their parents’ minds about the problems of poverty, unsustainable lifestyles and the human population.

“They are changing it right here and now. Right here at Green School!”

Thank you Dr Goodall for enabling us to follow in your footsteps!

Dr Jane Goodall on her time at Green School

Dr Jane Goodall, DBE is best known for her 45-year study of social and family interactions of wild chimpanzees in Gombe Stream National Park, Tanzania. She is the founder of the Jane Goodall Institute and the Roots & Shoots Programme, and she has worked extensively on conservation and animal welfare issues. She has served on the board of the Nonhuman Rights Project since its founding in 1996.