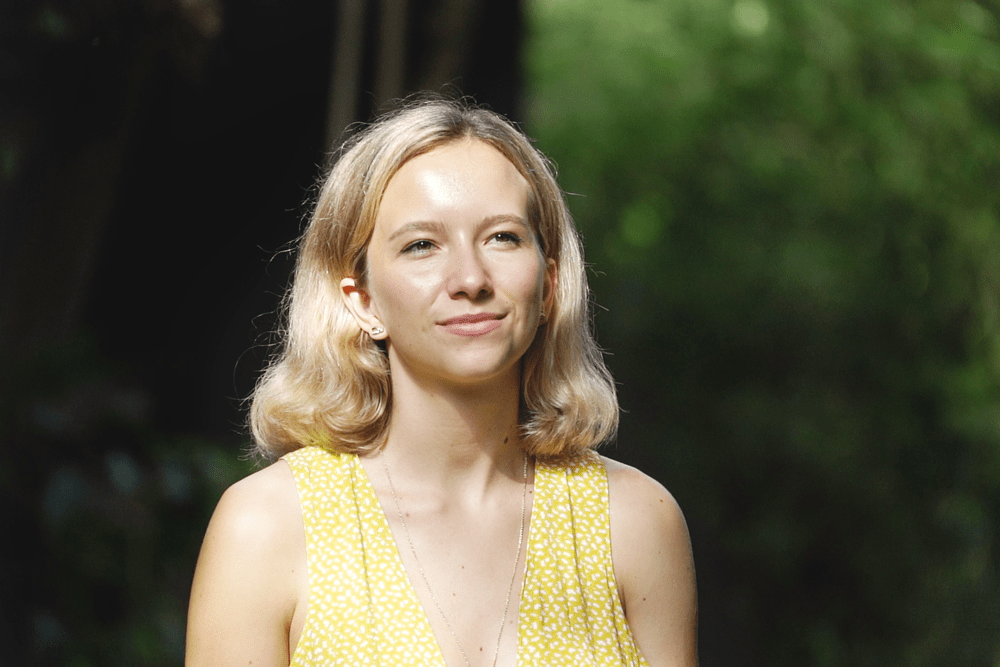 Her Vision: A world where we no longer live divorced from nature, ourselves and our communities & a world where young people feel empowered to take action in the face of climate change. 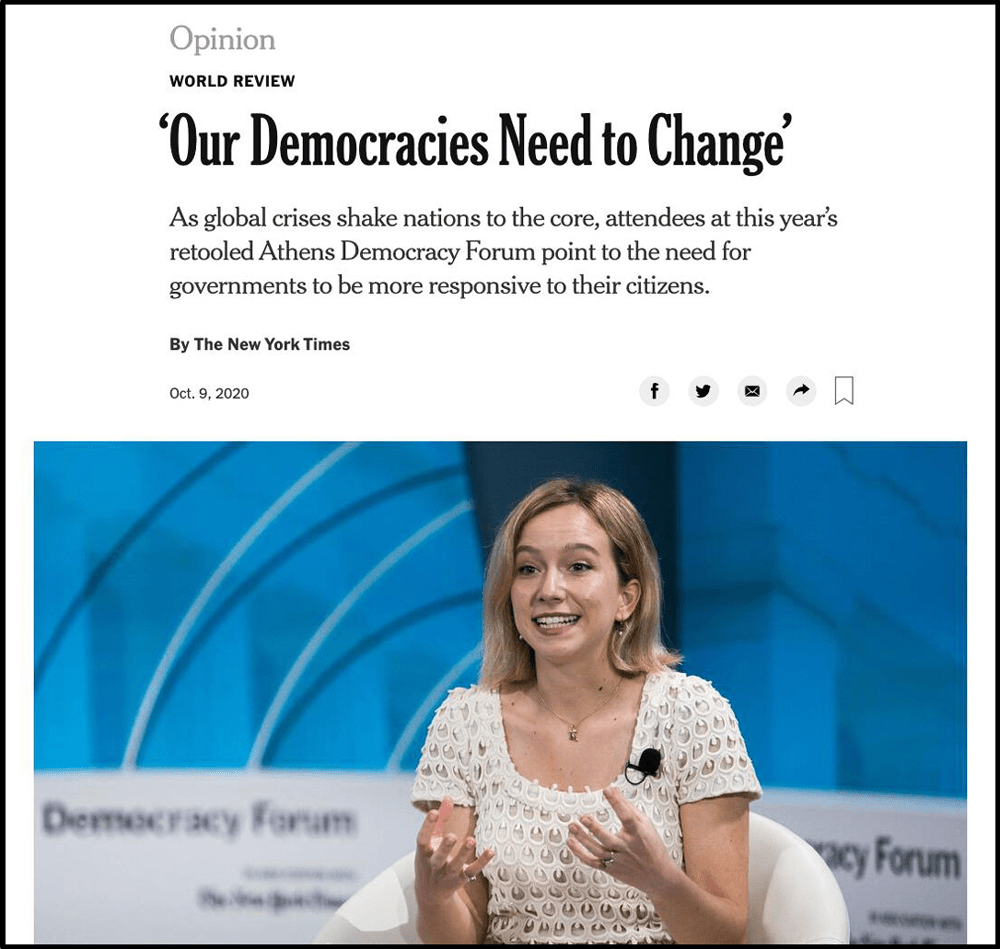 Clover speaking at Athens Democracy Forum, as featured on The New York Times

Clover Hogan is an activist, eco-anxiety researcher and founder of Force of Nature, a youth-led organisation helping young people from all corners of the world realise their change-making potential, take action on the climate crisis, and become custodians of a future by their own design.

Force of Nature serves as a launchpad to help young people step up, rather than shut down, in the face of climate change. They accomplish this through psychology research, understanding mindset as a resource for solving problems, and being experts in understanding responses to eco-anxiety. They have worked to build out an influential ecosystem of supporters and enablers including fortune 500 companies like PepsiCo and Unilever, and policy makers like those involved with this year’s COP26, bringing together the energy of youth with the knowledge of experience.

Recently, Clover launched the Force of Nature podcast, a 9-part series – now in its second season – that features important conversations with ordinary people who are doing extraordinary things to save the planet. She also serves on climate advisory boards including the Teach the Future and the COP26 President-Designate Civil Society and Youth Advisory Council. She is a trustee to Global Action Plan, has presented in boardrooms of some of major corporations, and is working alongside some of the world’s top environmental leaders. 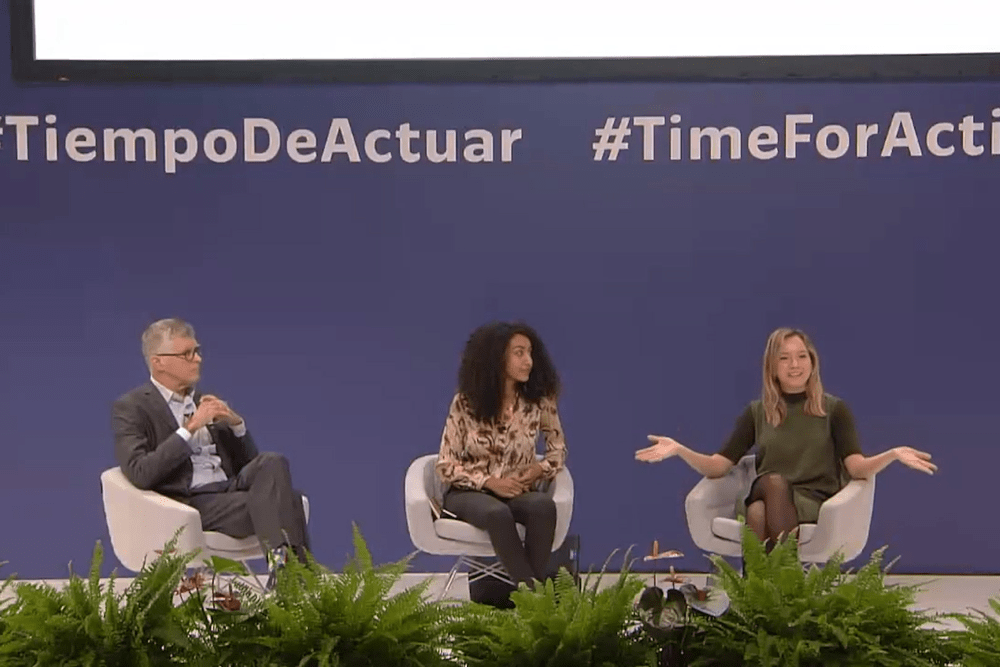 Clover speaking on the “Food, Forests, and What we owe Future Generations” panel at COP25

Although her love for the environment began long before stepping foot on Green School’s bamboo, Bali campus, Clover shares that it was Green School’s student-centered approach to a real-world education that launched her into her current career.    “Going to Green School was an incubator for my ideas, and kind of served as my own launch-pad into the world I’m in now,” Clover explained in a recent podcast interview with 101 Ways to Save the Planet. “Rather than rote learning and regurgitating information that probably wouldn’t serve me in the real world, Green School’s curriculum is all about connecting you to the problems that matter to YOU. My teachers didn’t ask me which career I wanted to pursue – whether I felt connected to it or not – they asked me what problems I wanted to solve, and then gave me the skills to solve them.”   Clover’s love of the environment began years before she stepped foot on Green School’s bamboo, Bali campus in the jungle. As a young girl growing up in and around wildlife in Queensland, Australia, Clover never saw herself as separate from the natural world, but as part of it. Eventually, she convinced her parents to enroll her at Green School.     “The most surprising thing about Green School was just how much Clover LOVED going there,” offers Clover’s mom, Janet Hogan. “In fact the only time I recall her being upset was the day she couldn’t attend because she returned home too late the previous night from an excursion and needed her sleep…How amazing to have found a school that students were so hell-bent on attending! The fact that Clover was so engaged in her studies and that her teachers were equally as invested, told me this was the perfect place for her to develop the skills and passion she would need to flourish in the future.” 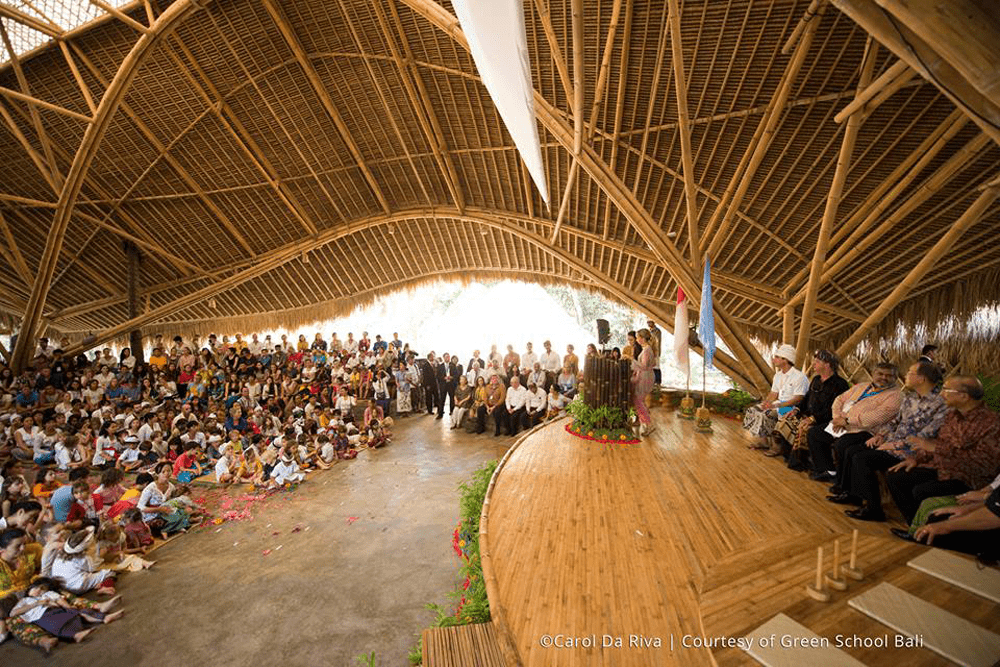 Up until going to Green School, Clover’s understanding of school was that it is always meant to be difficult. It wasn’t until she was at Green School that Clover experienced a true joy for learning, when students are empowered to align their lessons with their own passions and curiosities. When lessons are given with  R.E.A.L. world context.    “The best example I love to give of my experience at Green School was in the eighth grade, when we were reading Lord of the Flies,” Clover explains. “Instead of just reading the book, our teachers took us to a deserted island off the coast of Bali and sat us down and talked to us about social contracts and surviving in nature. We learned from experience how to solve conflicts among one another.”    “Same with mathematics! We’d study from a textbook about geometry, but then instead of just drawing shapes and designs we actually went down to the Ayung river to design a bridge, worked together to build that bridge with the community, and then thought through how to turn the bridge building into a self-sustaining enterprise.” 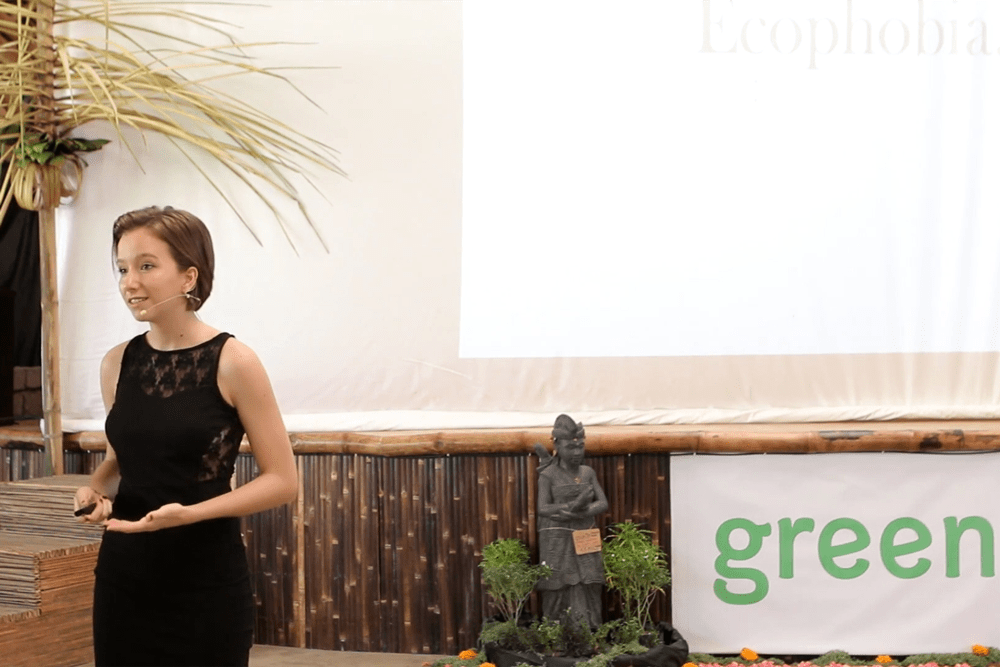 Looking back, Clover sees how her experience at Green School, especially compared to her experiences at other, more conventional schools, made her appreciate the power of education to determine how children show up in the world, how it can either inspire and empower them or snuff out their potential from an early age.    When it came to do her senior capstone project, the Greenstone, a moment of clarity came when one of Clover’s teachers brought up the term eco-phobia. It was something she witnessed as a child, when she first started hearing about the climate crisis in the news or through watching documentaries like An Inconvenient Truth or Food Inc. As she became more aware of the growing problem, she also became aware of how good the adults in her life were at pretending the problem didn’t exist. Eco-phobia explains the feeling of powerlessness we experience in the face of environmental catastrophe, the same feeling that makes many people simply stick their head in the sand and pretend it doesn’t exist.    Why is it that we want to ignore these problems? Why do we so often feel too small to make a difference? And how do we inspire people to feel they have an important role to play in solving these problems? These were the questions she sought answers to for her Greenstone presentation , and were the questions that would eventually define her career and activism. 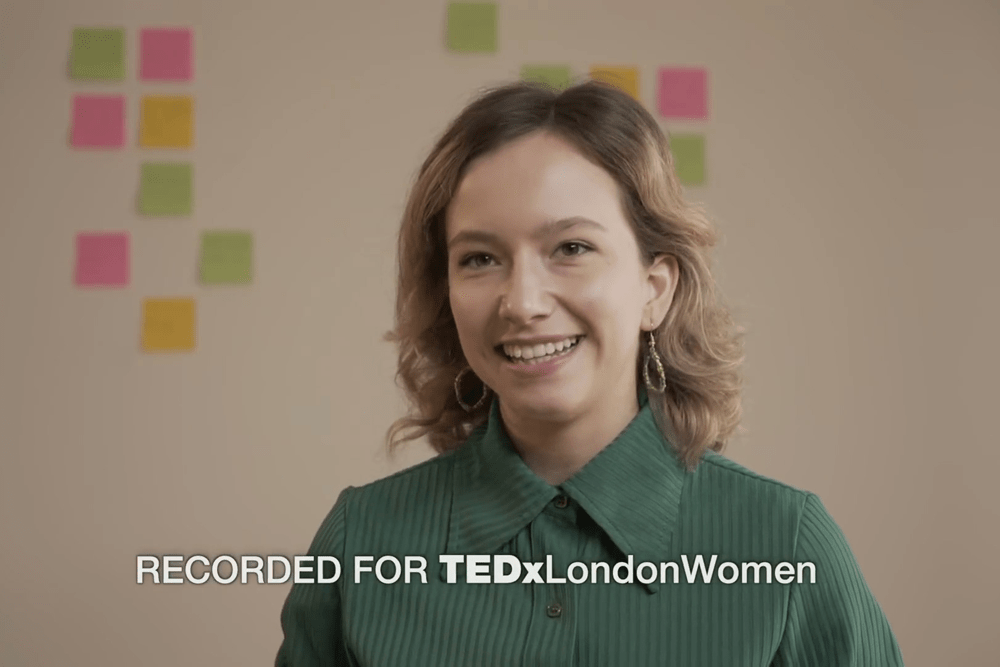 Speaking at TEDxLondonWomen: “Denial or despair? How to rewrite your climate change story”

“For most of my life, Climate Change was something I read about, but wasn’t part of my lived experience…until the Australian wildfires in 2019,” says Clover. “I was in London at the time, and had to watch through my phone as a billion animals were incinerated by the fires, as friends stood on tin roofs with hoses trying to hold back the flames.” It was a harrowing moment, and one that clarified the very real experiences of grief and of loss that are a part of this climate crisis.    According to the Force of Nature website, more than 70% of 18-24 year olds in the UK experience eco-anxiety. Realizing this, Clover started her organisation in 2018 as a one woman show. Today, Force of Nature has a team of seven – including fellow Green School graduate Kathleen Hamilton.    We are so proud of how much Clover has accomplished at the age of 22, and of her purpose-driven mission to make our world sustainable by encouraging and uplifting other young people alongside her.    “No one is born a leader; you learn to become one through courage and imagination. So like the young people who have not been around long enough to let society clip the wings of their imaginations, I invite you to let your courage take flight.”  – Clover Hogan 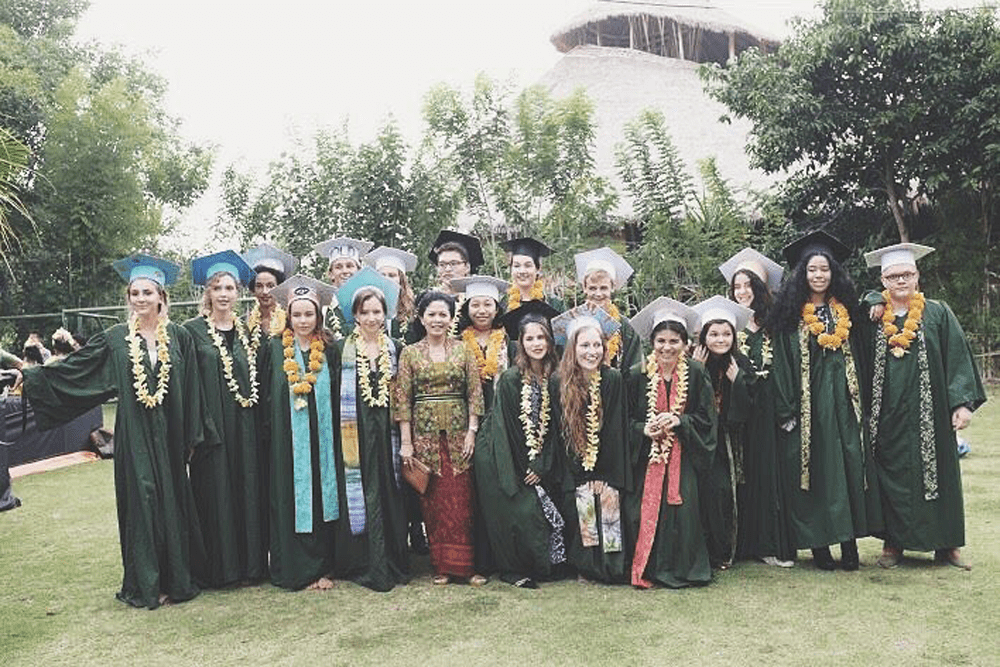 Clover Hogan and her classmates on graduation day