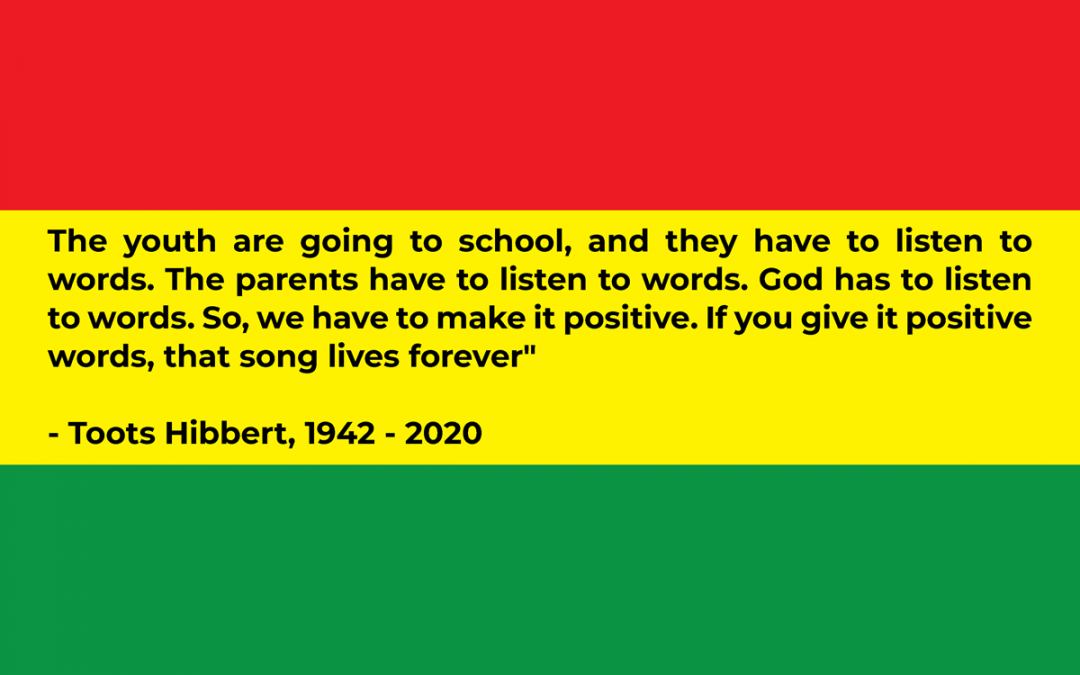 Music is such a powerful human construct. It amazes me how we have created such an awesomemedium to communicate, to celebrate, to share, to elicit emotions, to motivate. As a species, our ability to create music must be near the top of the list of greatest achievements. Yet, whilst artists all over the world bring what is real to us through song, somehow the messages swirl around an unproductive vortex of hope, of what could and should be. Imagine what the world would be like if Bob Marley had a say, if U2 lyrics formed our environmental laws, or if Pink was in charge of animal rights.

My favorite music is reggae. Frederick ‘Toots’ Hibbert passed away last week. My full respect goes to the family and friends of Toots Hibbert. Of course, everyone knows Toots. Yes? Maybe not, and that’s a shame. Toots and the Maytals were a pioneering reggae band that shaped reggae music globally. Their song, ‘Do the Reggay’, was the first song to use the word ‘reggae’ and they say Toots, in a way, created reggae. Everyone knows Bob Marley; well, Toots was bigger – he was the King of Reggae. Before Toots passed away, he was without doubt the biggest reggae star on the planet – he helped create reggae way back in the 1960’s, taking it from ska through rock-steady to reggae, and had released a new album last month (yes, that’s 2020 … do the Maths).

It’s sad when anyone dies. But there’s a deeper sadness for Toots. His music always puts a smile on my face and beats in my body. I never met him and I never saw him live on stage – they say going to a Toots and the Maytals concert isn’t like going to a show, it’s like going to party with Toots – but I know enough about his difficult life to be sad and confused, happy and motivated, thoughtful yet whimsical.

Toots lived a hard life. His parents died when he was young – he was the youngest of 14 children. He moved to Kingston, Jamaica, worked in a barber shop, and started the ‘Maytals’. Music is the soul of the Carribean – and Toots, along with Bob, Peter Tosh, Lee Perry, Jimmy Cliff, created a sound that brought smiles in difficult times, strength in oppression, and hope for a better future. Reggae is, afterall, a call to people to stand up, fight for your rights, love one another – just saying … We need more of this.

In the late 1960’s Toots was jailed for 18 months on a dodgy marijuana-possession charge. From this hardship, the song ‘54-46 That’s My Number’ catapulted Toots to reggae stardom – such a cool and funky tune, yet with a flavour of discontent and injustice. Like so much reggae, Toots sang about real issues. He sang about his own life, the Truth, like postcards from Jamiaca – he also sang about the horrible truth of slavery, systemic racism, climate distruction, economic injustice, the need to love, the need to help, the basic human need to be ‘good’.

They say Toots was a ‘pure’ person who helped everyone he could.Toots was one of the greatest soul singers of all time. Yes – they called this legend the ‘Fireball’. But he was a fireball of compassionate power, fighting for equal rights and justice. A fireball of Truth.

Are their Toots and the Maytals songs playing in classrooms this week? Are students learning about a music legend who changed the world for 60 years? Are they learning about dealing with hardship, about being a good human, about love, equal rights, and how to be an activist? Or are they rote learning meaningless information just because it’s in an outdated curriculum and is going to be in some pointless multiple choice exam?

Funky reggae soul music – with lyrics like: “I want you to know that I am the man, Who fight for the right, not for the wrong, Going there, I’m growing there. Helping the weak against the strong” – we need more of this ingrained into student learning experiences. More power. More soul. More truth. More love. Thank you, Toots Hibbert – with Big-Up Respect. We need to teach more Toots in schools.