BAMBOO TO THE RESCUE … FOR FROGS

This is a strange story:

A man parks his bike, walks to work, and ends up leading a class of third-graders on a mission to save frogs. Of course, that’s exactly what happens at Green School.

Here are the details:

Green School’s Primary Science teacher Olivier Bourdon, or as his students fondly call him, Pak Olly, routinely parks his motorbike on the east side of the school’s campus to give himself a morning nature walk before the bustle of his day begins. Each morning he noticed frogs, belly-up in the man-made ponds, or water catchments, he walked by.

“They’d gone in to spawn, but they couldn’t scale the walls to get out,” Pak Olly says. “It was a sad sight. They were belly-up, sometimes eviscerated, and putrefied. It really stunk.”

In a tangent, Pak Olly mentioned what he saw to a group of third-grade students.

“They just lit-up,” he says. “Every single kid was fascinated. They wanted to know more and more, so I took them to see it. That’s when they wanted to be guardians of the frogs.” 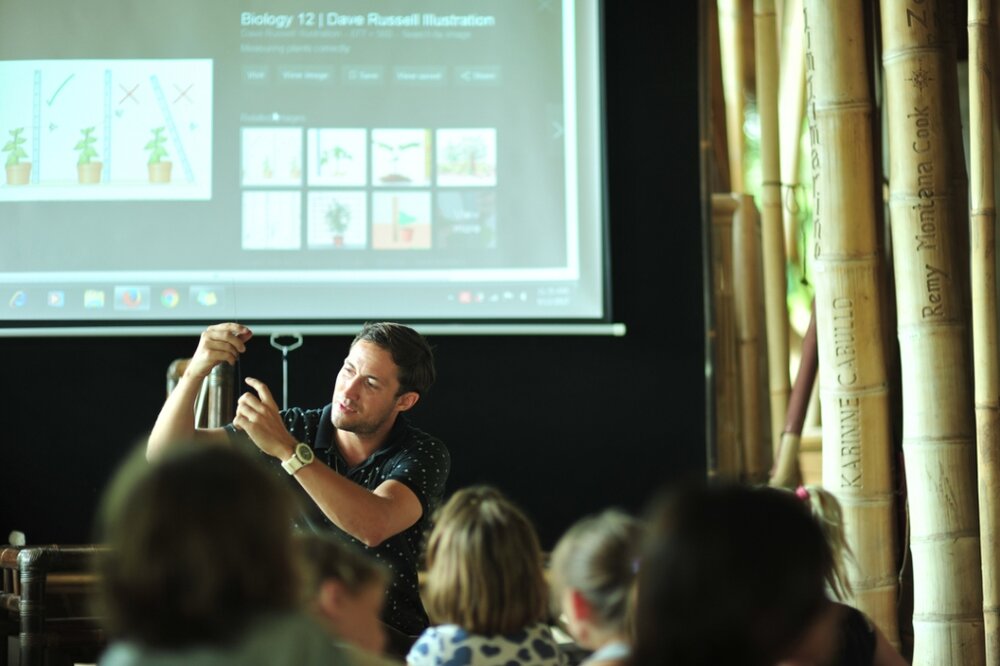 Frogs play an essential part in the ecosystem. They feast on insects, which helps control mosquito populations. They serve as food for birds and snakes and their tadpoles help filter water by feeding on algae. Frog populations are also on the decline worldwide due to climate change, pollution, and disappearing wetlands.

Saving the frogs became a mission for Primary School students!

At Green School, the focus on teaching sustainability and love of the earth is developmentally-appropriate. In the Early Years, the focus is on facilitating biophilia, a child’s innate connection and bonding to nature. In the Primary School, this expands to ecophilia and nurturing a love for the natural world. These connections very naturally build towards a desire to take action. Careful consideration is given to the unfolding of these stages, to ensure that ‘premature abstraction’ doesn’t occur, which can be the result of weaving too much ecophobia into the learning. But sometimes, Primary School is ready to take a stand and to activate an urgent solution. Operation Save the Frogs was launched.

“It seems like a small thing to try to save a handful of frogs,” says Pak Olly. “But, it’s actually quite significant for those frogs, for the environment around the school, and for the kids to feel like they can be guardians of the Earth.”

(A term that comes directly from the Green School song).

– Excerpt from the Green School Song

Along with Pak Olly, the third graders brainstormed how to save frogs. Many good ideas came up but were either unachievable or inefficient.

“We were stuck on the idea of a raft for the frogs, but that was just going to delay the inevitable and prolong amphibian suffering,” says Pak Olly. “It was a sweet image, but not going to work.”

Finally, the class hit on the idea of a simple ladder.

They set off to work, collecting bamboo, sticks, and yarn as their construction materials. They then built a ladder and placed it in the pond, complete with a repurposed plastic water bottle from the school’s waste management centre as a floatation device.

“Every morning, I’d walk by the pond on my way into the school and I’d look. No more dead frogs,” says Pak Olly. “That’s when we decided to expand the project.”

Water catchments with steep embankments are dotted throughout the campus, so the class set up a workshop during Sustainable Solutions week to invite members of the community to help construct frog ladders and set them up in various ponds. Working with the prototype they had created, students and parents worked together to lash the yarn with a clove hitch and then set them up in ponds around campus.

Life has improved for little amphibians all around campus. The nightly croaks and ribbits are slightly louder and maybe a bit more confident. Ponds with frog ladders are delightfully corpse-free. Walk by one and you may even spot a frog making its way to safety.

Just snap a photo and share it with #GSfrogladder. 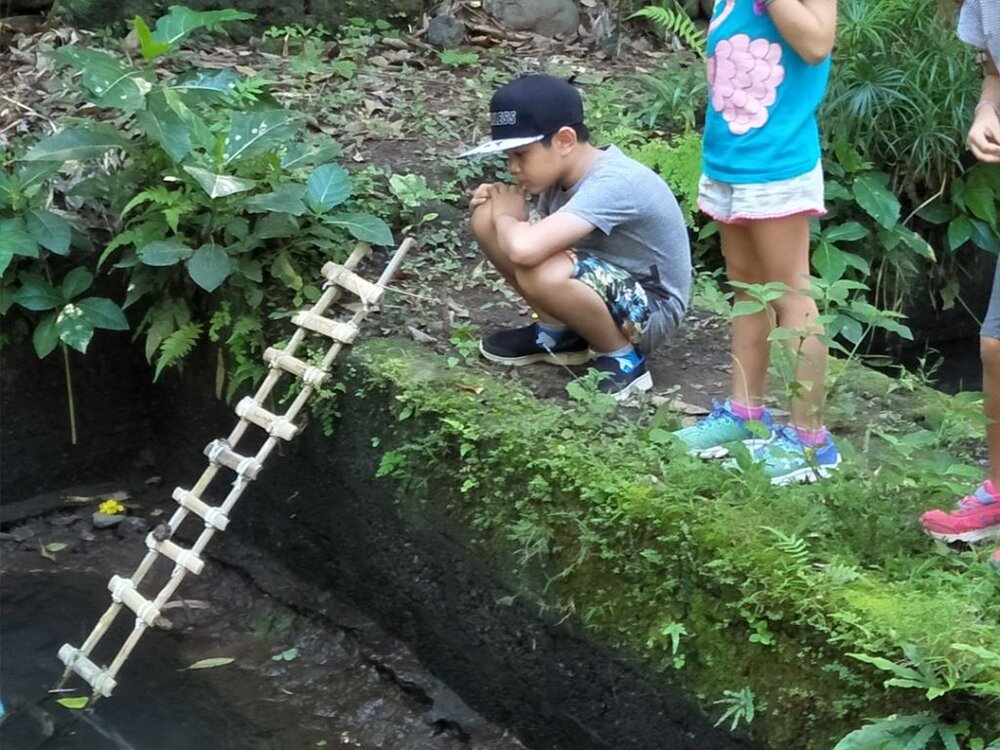 “Last school year (March 2018), in Grade 3A Science with Pak Olly, we learned about frogs and made frog ladders for the whole Green School campus. Frog ladders are a way to help frogs and toads to get out of ponds with high walls. You can help frogs and toads, by building a sustainable frog ladder. Frogs and toads go into ponds to lay their eggs, then do their best to climb out again because they can’t live their whole life in the water, swimming around and wasting their energy. A frog ladder is made from old wood/bamboo, string/yarn, and one plastic bottle to keep it afloat. Please help animals.”

“If you look at the project from wanting to protect an animal, to using recycled material, to working in teams and making a difference, there’s a lot there to make us feel really gratified,” says Pak Olly. “This is the essence of why we’re here.”

This is REAL learning. This is Green School.