A pig’s life in Bali 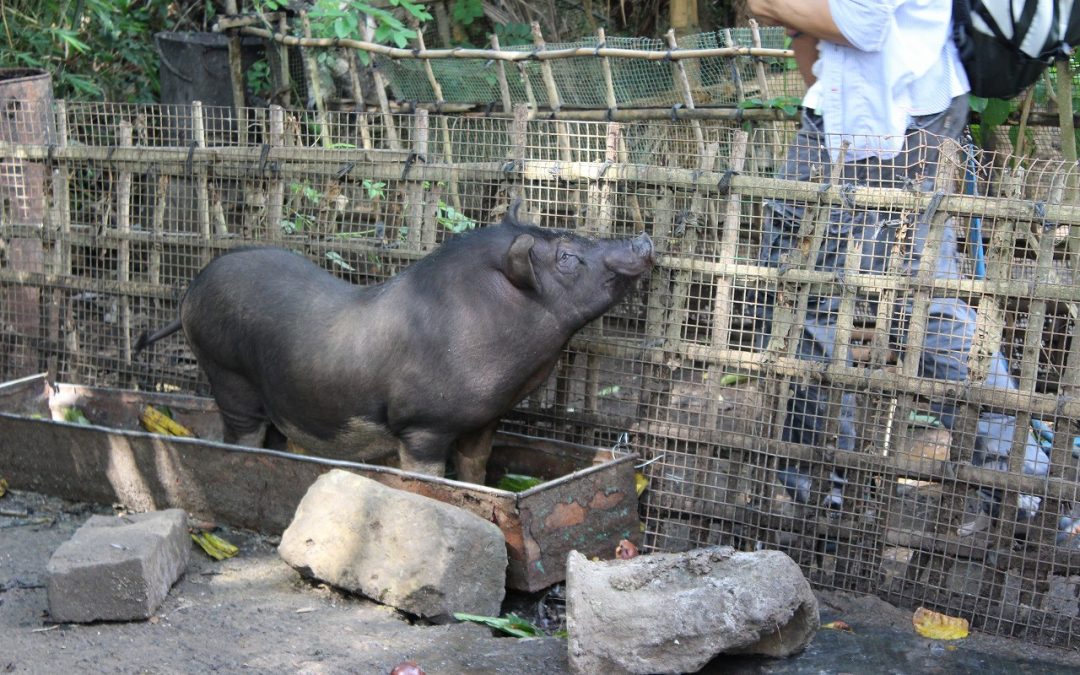 “Where does the meat we eat come from?” is a question that is being asked more and more frequently by consumers all around the world. However, a second question of the same importance still remains largely unspoken of. “How is the meat we eat killed?” seems to not breach people’s conversations and inquiries to the same extent as the question of where and how an animal is raised. At Green School, though, this is not the case. Our high school science class has spent the past few weeks investigating these two questions in regards to the differences and similarities between western and local Balinese practices.

The exploration was undertaken for students to appreciate and discriminate where meat comes from, as well as “to understand the process between taking care of animals to putting them on your plate” as science teacher Jackie Pye outlines. Throughout the course of the lessons, the science lab has had its fair share of challenging conversations, including some deep personal reflections and ethical debates. To mark the closure of the project, students then undertook the killing of a pig on school property, guided by the traditional Balinese pig killing methods. Read student Becca Stine’s story here

Historically, pigs were only killed for special occasions in Bali, such as a wedding or as part of a special offering at certain ceremonies. Nowadays, the consumption of pork is more widespread (one only has to notice the many Babi Guling restaurants on the side of the road to notice this), the method of killing, however, is still steeped in tradition and customs. The Green school head of kitchen, Ibu Kadek, explains how the knowledge regarding pig slaughter is passed through the generations in a family, and how only those in possession of the information are allowed to kill pigs. Moreover, this act is a man’s job, often carried out very early in the morning so that the pork can be ready for consumption as day breaks. She goes further into detail, pointing out that it is still special own a pig because of the large quantity of meat that they provide. The actual killing also follows a special method. First, a prayer blessing the pig is said, followed by the spearing of the pig’s main artery in its neck. Then, the waiting for the blood to drain begins, after which the pig’s skin is peeled off, the body is opened and the intestines are removed. Once these steps have been completed, the meat of the pig can be carved, prepared, and either sold or consumed.

Seeing that in Bali the method of spearing a pig to kill it is the only one used on the whole island, students followed this technique in their own killing of a Green School Pig. They blessed the pig, they speared the pig, and they consumed the pig, making ribs and Vietnamese spring rolls for lunch. However, there was deviation from tradition too. Jackie Pye, the teacher, articulates why. “We did not do the slaughter to learn about Balinese culture per se but observed some of the traditions as this is the only way to do it on Bali. This slaughter was not done under Balinese “code”. It was a quick version done on property so that we wouldn’t have to adhere to strict Balinese offerings as well as slaughter times. In fact women are not allowed to participate in this activity off site and there are other customs that we did not follow.”

Bamboo News Magazine interviewed a number of students before the killing took place. The students were mainly nervous, some a little excited, and very interested to witness (and for some, partake in) the killing. Once reconnecting with the students after the event, it was thought-provoking to hear their comments. One student, Luba Bauer, said “maybe it was better to have a pig enjoy its life instead of fear” in reference to life in a Balinese backyard in contrast to how a pig would feel in a western style factory farm. Another student commented on how the Balinese killing method may seem more brutal than the hygienic western equivalent, but if it can be justified by every day leading up to its death as being a good day (as compared to one lived in fear) perhaps it is, ultimately, the more humane option.

All in all, our high school students can now confidently say they know both where the meat that we eat comes from, and how it is killed. But more than this, the natural, holistic, student-centered approach that Green School employs has allowed them to understand a crucial aspect of our beings and sense of existence. Some tough questions were posed. And our students seem to have found some percipient answers.