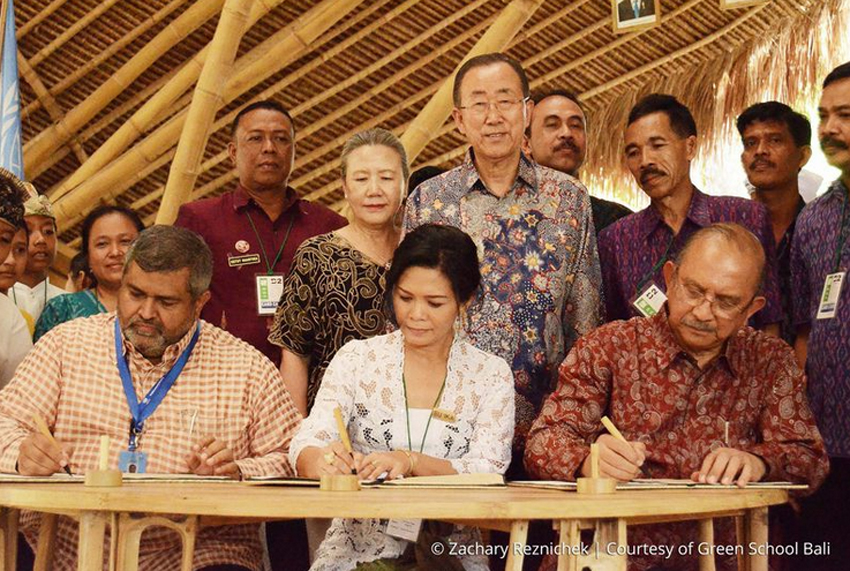 Clover Hogan gives her account of what it was like to MC the assembly at which The UN Secretary General witnessed the signing of an agreement which puts our school at the centre of promoting green education in Indonesia by identifying 1 million “green youth ambassadors” in schools across the country by 2017.

A huge thank you to our two very dedicated and special parents Ibu Carol Da Riva and Pak Edu Petta for creating the beautiful video documenting this special day in our history.

Here is the introduction given by Ibu Eka, President of Yayasan Kul-Kul (see main photo)

To All Assemble,As President of Yayasan Kul-Kul, I am honoured to sign this MOUIt shows our school positive’s impact.It is true, when we act together on local issues, our collaboration resonates globally.I sign this MOU on behalf of all our students, teachers, parents, staff: past, present and future. This is our planet we are gardeners growing a positive future for all.Thank you

FROM ONE UN SECRETARY GENERAL TO ANOTHER
By Clover Hogan

A couple of weeks ago, I was sitting on the lawn and sipping on a sweet coconut as I shared with Mum and Dad my dream of heading up the United Nations. They nodded encouragingly, as parents do, not wanting to burst my bubble. But never could we guess that I’d be uttering those same words to the Secretary General of the United Nations just three days later.

As the directors of Model United Nations Bali, my friend Becca and I had been chosen to M.C. the event held for Ban Ki-Moon and other esteemed guests. Upon arrival at Green School, they were greeted with traditional Balinese gamelan music and some 500 students, teachers and press, all neatly crammed into the Sankep, our bamboo school’s equivalent to an assembly hall. The ground was littered with pink flower petals, the stage accentuated with bamboo shoots, clumps of green foliage and vivid orange flowers. A rising sense of nausea and excitement was taking over my body as the S.G. approached the podium where I was positioned. I discretely wiped my clammy hands against the sarong wrapped around my wobbly legs, sensitive to the press clicking away on their cameras beside me, and shook Ban Ki-Moon’s outstretched hand. A warm smile lit up his eyes as I guided him to his chair, centre-stage. When the applause slowly faded away, I stepped up to the mic and asked the audience to be seated, gaining control of the room as best I could in my relatively squeaky, not-so-authoritarian voice.

“Secretary General Ban Ki-Moon, Mrs. Ban, and distinguished ambassadors and dignitaries of the world, it is our great honour to host you all at the beautiful Green School today.” I said as smoothly as possible, tapping my foot in sync with my voice to slow down the flow of words that were to follow;

“My name is Clover Hogan and I am currently in grade 10. As the Deputy Secretary General of our very own Bali Model United Nations Conference, I am passionate about International Relations and it is a dream of mine to one day work in the United Nations, as a leader who creates environmental as well as humanitarian change across the globe.” I took a breath and watched in my peripheral vision as the Secretary General nudged the man seated closest to him, smiling my way with an encouraging head bob. I shuffled backwards between the Indonesian and UN flags as Becca introduced herself. After sharing our school’s vision, I asked students to rise from their respective countries, to demonstrate that Green School is United Nations.

Becca received a laugh when telling Ban Ki-Moon that it was an honour to meet a fellow Secretary General, and before too long, we were asking the S.G. to speak. Ban Ki-Moon’s advisor spent the majority of the time whispering in my ear that we had to speed things up, so between hastily flicking through the script in my hand and receiving impatient glares from various UN men in suits, I somehow managed to take quite a lot from the Secretary General’s words. He told us, as students becoming future green leaders, that he was raising his voice to world leaders in order to ensure that the world improves environmentally for successive generations, through addressing climate change, worldwide epidemics, and other various threats to the planet. Astonishingly enough, the S.G. stated that in all of his years of travelling, Green School was the most unique and impressive school he had ever visited.

After opening the floor to questions, singing the Green School song, and signing the MOU that the Secretary General had come to witness, it was time for our honourable guest to leave the building.

All round, Ban Ki-Moon’s visit was an incredible and eye-opening experience for me. I managed a glimpse into the real United Nations and the life that the 32nd most powerful person on Earth lives. I developed a profound confidence in my public speaking skills, reasoning to myself that if I can comfortably address the head of the UN, then I can speak in front of anyone! I was a part of REDD+ (Reducing Emissions from Deforestation and forest Degradation) and the signing of our MOU—potentially benefiting the lives of 1 million students in Indonesia by 2017. But most exciting of all, were the final words of the Secretary General whispered to me as he made his departure:

“Very nice to meet the next Secretary General of the United Nations. See you soon!”