The Governor of Bali Signs MoU with BBPB Team 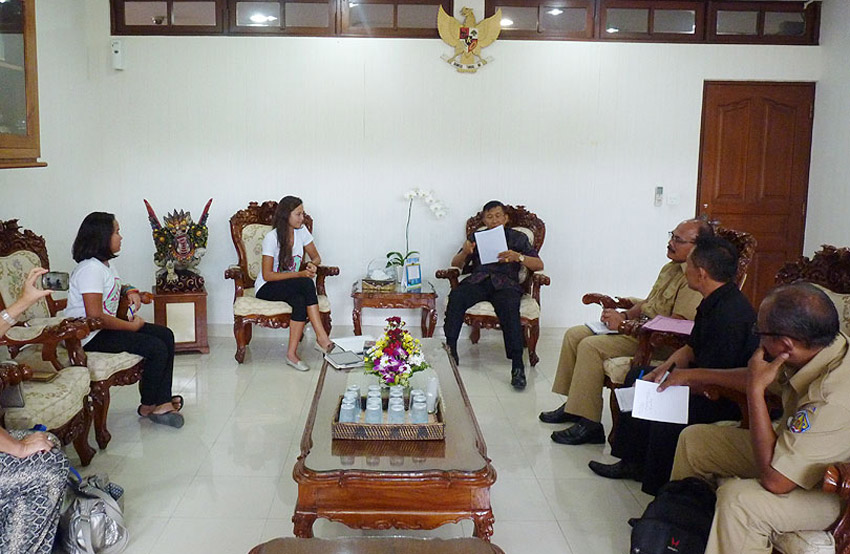 “Welcome to Bali, do you have any plastic bags to declare?” will soon be the question tourists are greeted with at Bali International Airport, said the Governor of Bali during his historic meeting with the Bye Bye Plastic Bags Girls this month.

Welcome To Bali, Any Plastic Bags To Declare?”

Bapak Made Mangku Pastika’s pledge came after having signed an Memorandum Of Understanding to take measures that will see the use of plastic bags minimized on Bali by January 1, 2016.

After a year of campaigning, Pastika made good on his promise to meet with the Green School students, Isabel, 12, and Melati, 13, having decided it was time to commit and support the cause that has taken Bali by storm.

Pastika said he was touched by the social initiative of the “child led action” that had gained such attention on island and around the world, following their recent talk at INK India.

The girls appealed to the Governor to acknowledge the hard work of the Bye Bye Plastic Bag Team, asking him to guide them through the journey to heal Bali of its garbage problem.

“I am not a hero, it is part of my job,” replied Mangku Pastika.

He said he not only sympathized with the project, he loved it and wanted to support it.

“I will commit to it and I even want to become a leading member of your team,” said Mangku Pastika.

The Bye Bye Plastic Bags campaign began in 2013 when the two Green School students attended the GIN conference and decided to follow their role models to take action to make a change in the world.

Since then, the girls have gathered a team of kids from local and international schools around the island to support them and have managed to collect over 60,000 signatures for a petition to ban the use of plastic bags on Bali by 2016. Click here to see

After an action packed year, the girls and their team have met the UN secretary General, Ban Ki-moon, and now have permission to use the UN logo. They also met UN peace messenger, Dr Jane Goodall, and became champions of her Roots and Shoots program. They have also just recently been made junior ambassadors for Rotary International.

At the meeting today, Melati told the Governor of their dream that one day all those visiting Bali would be greeted at the airport with the words: “Welcome to Bali, do you have any plastic bags to declare?”

Pastika wasted no time. Within minutes his people were videoing him with the girls and their ground-breaking message Click here to see

“It won’t be easy” said Isabel,“ but together, working with the Governor, and all the kids from Bali, we can return this island to the beautiful paradise it was.”