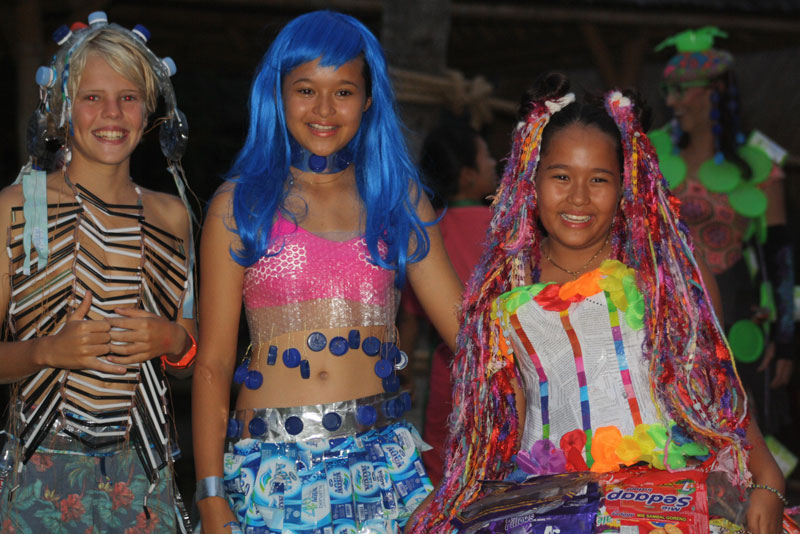 Local and international children and their families came to the inaugural Plastik Tidak Fantastik Festival to help support the Bye Bye Plastic Bags campaign that is sweeping Bali.

Government officials, children from the campaign’s pilot village of Pererenan, environmental organisations, crafts people and workshop artists came to see what was to offer and joined in on the activities.

Even Dr Jane Goodall made a surprise appearance to meet the BBPBs girls, Isabel and Melati Wijsen, and their team.

The day was filled with various workshops where children could be seen making rubber jewellery, taking part in the Eco-Bali trash sorting challenge, turning recycled goods into crafts, moving to the rhythm of Capoeira, the Brazilian martial art or dancing to the beats in the African drumming class.

Capoeira with the kids

There were salsa classes for adults, Qi Gong – a Chinese healing practice, children’s theatre and live music by the Balinese musical artist, Navicula, and the band A Conscious Coup.

Later in the afternoon students of all ages took part in a sponsored fun run, jogging around the field to the sound of “Celebrate Good Times Come On”.

And celebrate they did, making almost 45 million rupiah for the cause in the process.

But, the climax of the day had to be the Plastik Tidak Fantastik Fashion Show, which featured clothing designs made entirely from trash by the students themselves.

Isabel and Melati led a group of Green School students in a fashion parade that dazzled as well as any Paris runway.

Costumes made out of Bintang lids, evening dresses out of recycled offerings, mini skirts out of black and white bags and a ball gown made out of rice bags all lit up the stage and left the audience wanting more.

The festival caps off a six month push on the island that has seen the girls and their team do a flashmob at Tanah Lot, rid the pilot village of Pererenan of plastic bags – replacing them with reusable paper and material ones – and gain a huge amount of media attention to combat the problem of plastic on Bali.

After a day of delivering paper bags in Pererenan, the BBPB team play soccer on the beach with locals

The petition to get a million signatures in order to pressure the government into banning plastic bags on Bali is steadily reaching its mark.

The funds raised at the festival are going towards the next stage of the Bye Bye Plastic Bag campaign, which will feature a lot more merchandising and continuing work in the pilot village.

Green School is very proud of the team and congratulates them on all their hard work since the campaign began last October.