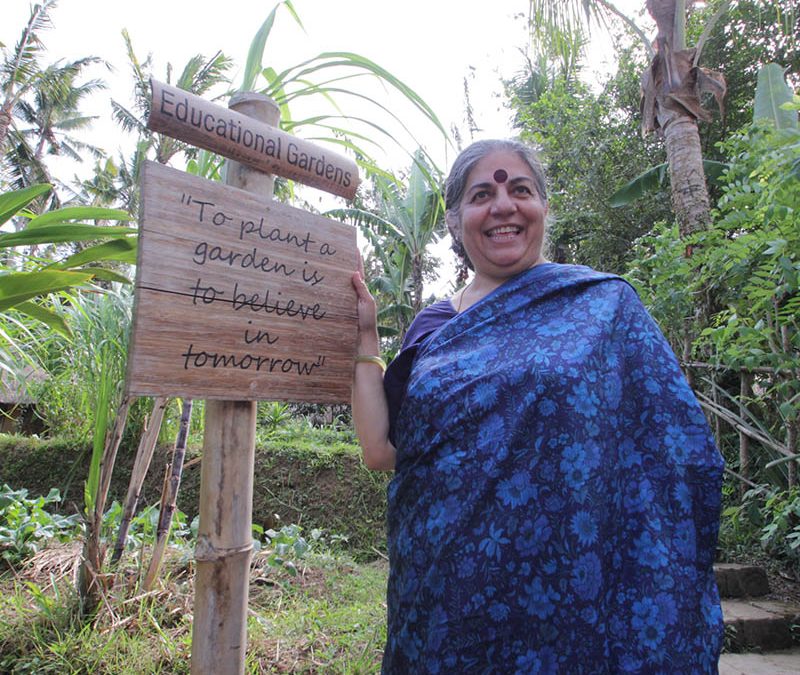 Sewing The Right Seed Within Our Students

Environmental activist, anti-globalization advocate, and author of 20 books, Dr. Vandana Shiva, delivered a chilling prophecy about the consequences of genetically modifying our foods to a special Green School assembly.

Dr Shiva was in Bali to take part in the Our Seeds, Our Future Conference in Ubud and made time to come and visit the school.

The world bio-diversity expert told the packed audience of 400 children evil no longer lurked in the shadows, but in the genetically engineered food Monsanto has tucked into our pantries.

see youtube link of Dr Shiva’s conversation with our assembly

The largest producer of GM seeds on the planet has stolen the reins over our food industry and demanded possession over something that unequivocally cannot be claimed, she said.

“G.M.O. stands for ‘God, Move Over … we are the creators now,” told the audience

Monsanto was a corporation of endless greed and destructive technology, on a mission to decimate biodiversity and humanity as we know it today.

Dr. Shiva emphasized “these guys truly do have us headed down a grim path.”

Rather than simply honouring the magnificence of nature as it is in its whole and pure state, Monsanto patents and manipulates the seed species farmers have been working with and evolving for thousands of years. They claim as much of the food industry as possible and add even more wealth to their already toxic system, she said.

This completely went against the precious cycle of life and all things natural, ultimately ending the diversity of species.

She told of Monsanto’s argument which states by changing the genetic code of plants and pumping deadly chemicals into them, they are increasing crop yields and, in turn, feeding more people across the globe.

Ironically, the problem that they are allegedly trying to solve is the very disaster that they could cause: world famine, she said.

By tampering with seeds that have been evolved over thousands of years, original crops that farmers have developed over generations are being replaced by GMO’s that don’t thrive like traditional crops in local soils. This means climate change risks wiping out absolutely everything.

“When temperatures rise by a few degrees in India, and drought lasts for several years at a time, there won’t be anything left,” she said, “not even the fakes.”

Genetically altered plants produce sterile seeds, a.k.a. suicide seeds. Biotech companies (with the support of the US Department for Agriculture) have been conducting greenhouse tests for future commercialization.

Suicide seeds are a way for major corporations to enslave farmers, forcing them to buy new seeds each year and not save as well as share seeds with each other, said Dr Shiva.

“Only in farming do we give back. Every other economic activity we take from nature.”

“We say a beautiful prayer when we plant seeds; ‘may the seed be exhaustless’. That’s the nature of seed, to never get exhausted.”

Not only is Monsanto endangering the future of biodiversity as a whole, but it is also creating major health concerns across the globe.

Traces of the active ingredient in Roundup, yet another one of Monsanto’s “products of evil”, have been found in numerous foods that are being sold and consumed, causing cellular damage and leading to disorders, diabetes, heart disease and cancer, she asserted.

“Food has become the single biggest source of bodily discomfort. Whether it be through obesity, diabetes, cancer or children with autism, the rate of food related diseases is just exploding.”

Control of the seed industry is dwindling down to fewer and fewer stakeholders, and Monsanto is currently running in first place as the most powerful contender.

This multi-national food company is dictating what we eat, she told the Our Seeds, Our Future Conference later in the week.

Monsanto’s seeds take up 40 percent of crops in the United States alone and 27 percent worldwide.

Rather than feeding the planet, Monsanto has driven food prices up exponentially and kicked farmers out of business, taking the biggest cut for themselves rather than giving back to the land and supporting the original co-producers and co-creators.

“Every step of offering us the illusion of superior seed has been a step of degrading the earth, wiping out farmers, and creating disease,” she told the conference.

The seed and herbicide business model traps farmers into depending economically on major corporations for business. They are stripped of choice as slaves to the industry who can no longer return to traditional methods of farming after Roundup has destroyed their soil.

“For me, seed saving is important because seed saving is basically maintaining the continuity of life. You save a seed, and you’re committing yourself to the future.”

Monsanto, with its ‘myopia monoculture of the mind’, has taken the role of universal ruler into its own hands, controlling the future of our food industry, and the roots of biodiversity on our planet.

However, seeds of hope have been planted by Dr. Vandana Shiva with the development of her innovative seed banking program, Navdanya.

The banks combat climate change and put an end to the dependency of farmers on GMO corporations, through the collection of seed that is rescued from disappearing off the face of the earth all together, multiplied and then distributed according to farmers’ needs.

Change makers such as Dr. Vandana Shiva are the driving force behind a groundswell of widespread awareness, carrying the hope that it’s not too late to reverse the mistakes of major corporations.

And now it’s our turn to join them in taking a stand– not because it’s simply important, but because without the diversity of species, life and consequently humanity, cannot and will not exist.