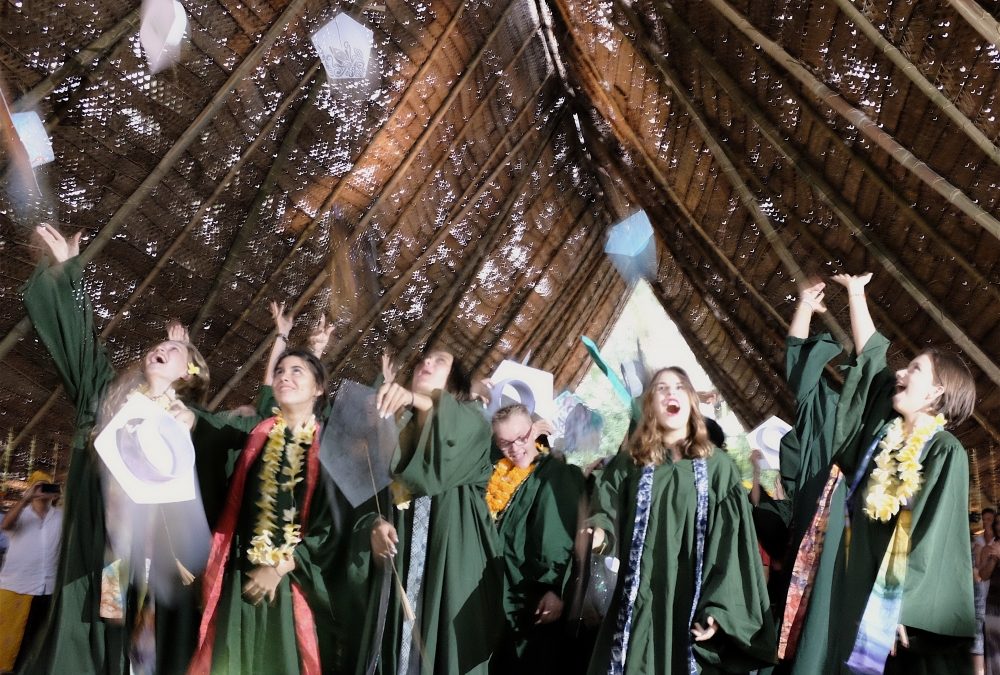 Beyond Walls. Beyond Borders. Beyond Limits.

As we head towards 2018 and celebrate 10 years of Green School, we take a little peek back at how the times have changed over the years. Let’s jump in the time machine and travel back just a few years to see some of the milestones of the Green School journey.

In 2012, Green School established its community integration programs – Kul Kul Connection, which provides English and Sustainability courses for local children around Sibang Kaja, where Green School resides; and KemBali, our resource management and recycling station. The first pairs of Bali Starlings were released on the campus, as part of Green School’s conservation program. Other highlights of 2012, included the opening of the Middle School Barn (prior to that the Middle School tribe shared the 2nd Floor Heart of School with the High School).

2013 saw the launch of Bye Bye Plastic Bags, a student-driven social movement to ban the use of plastic bags in Bali and beyond. The amazing ‘Greenstock’ music festival was launched which aimed to raise awareness on environmental issues. The first Green Educator Course, a 5-day professional development program for educators in Green School, Bali began. This was a huge year for Green School as the first High School class celebrated their graduation in June 2013. The Green School Graduating Class of 2013 were sent on their way into the world with messages of support from Al Gore, Jane Goodall, Bob Brown and Richard Branson.

Another big year of growth and community was experienced in 2014 with the incubation of the BioBus, the first student-driven school bus running by used cooking oil, and the first delegation of Green School Green Generation (Green Gen) student activists headed to the COP (UN Convention on Climate Change). Green School also hosted honorable visitors, including Dr. Jane Goodall and the UN Secretary-General of the United Nations, Ban Ki-moon.

(Plus the now well-established tradition of the Green School’s very own Ogoh Ogoh festival was launched in spectacular style.)

In 2015, Green School opened 6 new Primary School classrooms; Sustainable Solutions – an annual eco-festival, became a part of the annual community calendar; a new record of 30 nationalities were represented in the community; and the Green School Parents Association (GSPA) was formed, representing the Green School parent voice on the Board of Directors.

In 2016, full-time student enrolment grew to 400 and Kul Kul Connection grew to 300 students. In terms of Governance for Green School as a non-profit, the year ushered in a new, more community representative Board of Management. Eve Ensler visited the Green School to take V-Day to a whole new level. The Green School Farmer’s Market was established and we gathered together for the first ever Penjor Festival. The sound of Green School, the Marimba was brought back to the music program.

Today, the school is still evolving, but as we finish the last few weeks of 2017 Green School celebrates 35 nationalities in the community, a student body of 440, including a record 39 Local Scholars. The school also achieved international school accreditation from WASC (Western Association of Schools and Colleges). Awards included the Zayed Future Energy Prize and four awards at the Reimagine Education Awards. A record $500,000 was raised in the Changemaker Challenge to help further grow the Local Scholars program and build new facilities at the school. There is more to do and more happening as Green School moves into its tenth year.

2018 will kick-off with the opening of the Community Innovation Hub (i-Hub), the Energy Education Hub (e-Hub) and a new science lab. In moving towards Green School’s 10th-year-anniversary celebrations in April 2018, January will also start with Let Your Green Soulshine with a big supporter and friend of Michael Franti coming together to celebrate with local musicians to support the Local Scholars Program and Bumi Sehat.

There are many ways to be part of our 10 Year Anniversary which kicks off on Jan 12, 2018.
Come celebrate with Green School.