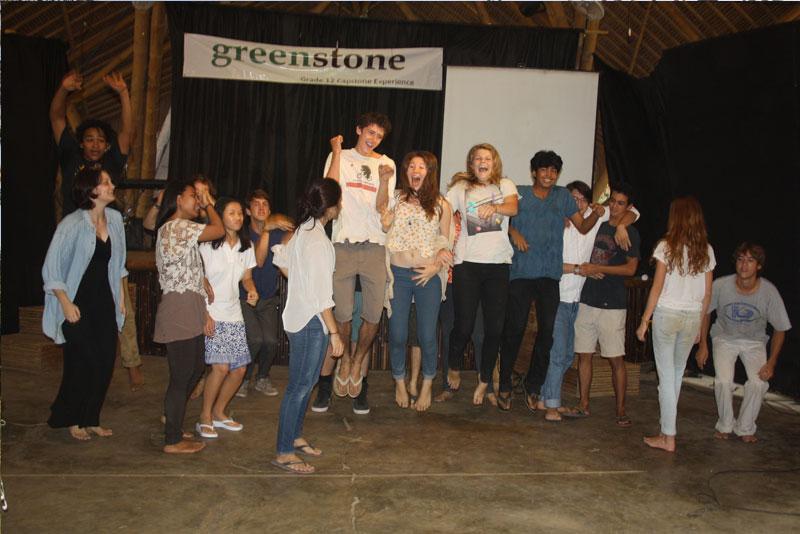 From nutrition to gender equality, death, gratitude, feeding the planet and social media – Green School’s graduates covered it all

The Green Stone Project Presentation is the students’ very own TED style event and capstone experience to their high school years.

The finale is now in its second year and represents Green School’s answer to a final thesis.

High school co-ordinator, Leslie Medema, developed the concept around what the teachers believed a “person leaving Green School should be able to do and communicate”.

The schedule showed a long day of speeches but after the first Greenstone talk commenced, the audience was already hungry for more.

The day began fittingly with Silas and his talk about Glossophobia: Speaking through the fear. He made it through to large applause. Alicia used audience participation to make her point about Music is Power and ended with one of her own songs.

Teo’s scientific brain was all about harnessing the sun with his Power Overwhelming: From man to star, while Eddy was charismatic as ever appreciating the small things through his concept of Ethereal Gratitude.

Alex’s presentation, Lifeter: Clowning around the world, charmingly justified his not knowing what he wanted to do next and made for an entertaining expose of what amounts, ironically, to a very grand plan to bike around the world spreading happiness to people less fortunate than himself.

Maddie’s insight into death from her own personal experience, as well as the observations of different Hindu cultures, had people hanging on every one of her incredibly evolved thoughts. Maddie Stine’s Greenstone on “Death: life doesn’t end when the breathing does”

And then, the topics turned to food.

Isabelle told of the importance of nutrition and Japhy made us proud to feel part of Green School. Here was a graduate going out into the world as a true ambassador for the education he had received. His talk, Homegrown: Expanding the possibilities of food production, showed his journey as an organic farmer and advocate of sustainable living.

Tristan took us through the fear he had to conquer in order to make it down some of the most fearsome rivers in the world as a kayaker. He spoke of how understanding your fear is to understand yourself.

Shea blew our minds with her thinking on gender equality, exploring where prejudice begins and where it should end in Gender Boxes: Beyond a definition.

Pim screened her beautiful documentary about language – The Human Tongue: Culture and silent film; and Josh took us on a conceptual and highly amusing journey into Negative Numbers: Before there was zero.

There wasn’t a dry eye in the house by the time Dillon had finished telling us how nature had saved his life, as his parents had held an intervention in the desert for him at 16, when he had gone off the rails with alcohol and drug abuse. Nature’s Life Lessons: Growth influenced through nature was a highly emotional moment for he and his family as it marked, not just the end of his time at Green School, but the turning point that had brought him to Bali.

The most intellectual of the talks was Kyle’s. He gave a brilliant historical and contextual analysis of where we find ourselves with social media. Texts, Tweets and Global Turmoil: How small screens are shaping our world, showed that this generation can and does have a handle on where technology is taking us.

Achyuth’s The Changemaker of 21st Century: It is in you and me, spoke beautifully of the importance of sensitivity in all that we do, while Mythra showed her sensitivity with a captivating unveiling of her body as a canvas art.

At 7pm when Imogen got up to deliver her talk on Education to End Poverty, the Green School community had been on an emotional ride they could never have expected.

There is no doubt that these students are remarkable human beings and Green School is proud to be sending these graduates off into the world to continue their journeys.

Class of 2013-14 pray to the Gods before their graduation