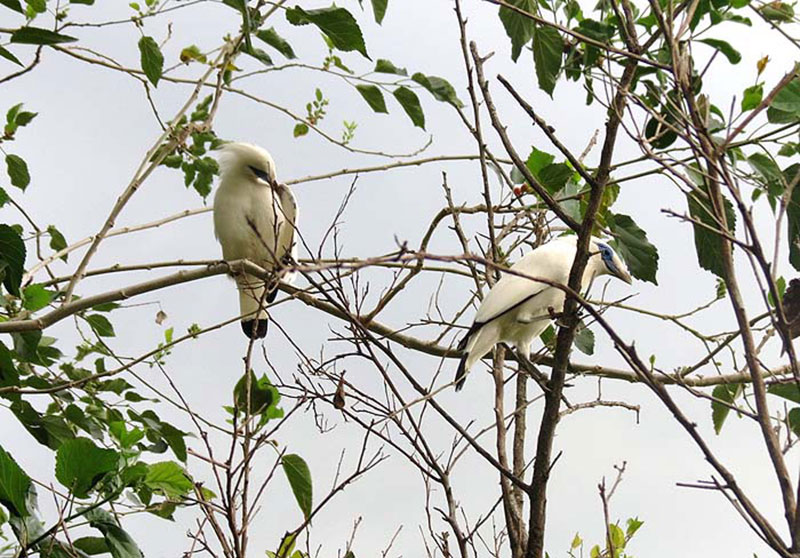 An update from The Begawan Foundation, within Green School.

The pair were first seen by the beginning of November but the story of how the pair got together will forever be part of Sibang folk lore.

Jane Starling was released by Dr. Jane Goodall on 17th June 2015 at Green School, Sibang. She quickly found herself a mate, a male bird released in April 2015. He became known as Lucky.

They flew across the river and found a hollow bamboo pole with just a small entrance in it. As it seemed perfect for a nest, the two birds brought back various twigs and started to build a nest inside.

Unfortunately, one day in July, Lucky was no longer around. Jane Starling kept flying back and forward across from the breeding site across to where they had been nesting. She would sit in the nearby tree and sing, but no luck.

Eventually, she started to fly again with the other released birds, but we were determined to try again.
On August 28th, a male bird was chosen and released by Ban Ki Moon. It took some time, but eventually we became aware that Jane and Moon were flying together. Success!

Jane took him across the river to her previous nesting area, and they started to clear out the old material. They spent a lot of time just enjoying being out in the wild, but our estimate is that around 10th November she laid her egg.

On 24th November the chick hatched, and both parents bring food regularly to the nest.
A chick born in the wild is always exciting, one born to this pair is extra special. We monitor daily, but have yet to see the young chick hidden far back inside its bamboo nest. We expect to see it fledge and take its first flight outside towards the end of December.