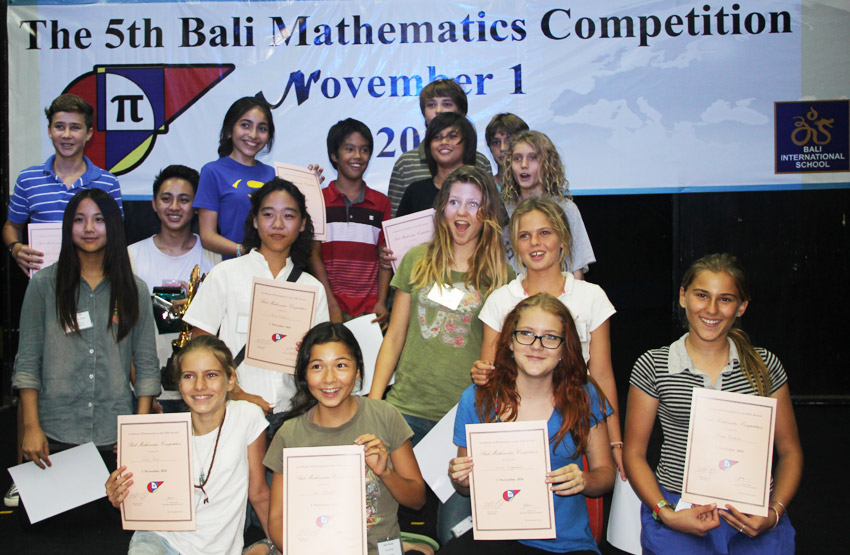 Amazing result by Maxwell Hidajat who came runner up in Senior Individual Round.

The 5th Annual Bali Math Competition was held at the Bali International School in November. Green School sent twelve representatives in four teams of three to compete with other students and teams from international and local schools across Bali.

The competition had attracted so much attention that even a school from Papua sent representatives to compete in the competition. In total, over a hundred students competed in two divisions: a senior division as well as a junior division.

Putting their heads together to get such amazing results for their students, our middle and high school math teachers, Sal Gordon and Kyle King

There were four rounds that the students competed in. An individual round, a team round, a codebreaker round, as well as a passback round, each lasting an hour long. At the end of the day, the scores were tallied and the results were announced. There were a total of twelve awards given out, six for each division. Each division had three individual awards and three team awards to be awarded.

Our Junior Team doing us proud

Although the Junior Teams did not win any trophies (by the smiles and laughs they would have won the Enjoyment Prize), the Senior Team – The Green Pi-thons (Anya Al-salem, Maxwell Hidajat, Mirei Karasawa) achieved Third Place.

Maxwell won 2nd place in the Senior Individual Round. We have competed in this competition in two previous years, in which both times we placed well in the top three as well, so we are happy to maintain our standing.

Congratulations to all students who participated.
Big thanks to Pak Kyle and Pak Sal for organising the Green School teams.