Killing It In The Arts 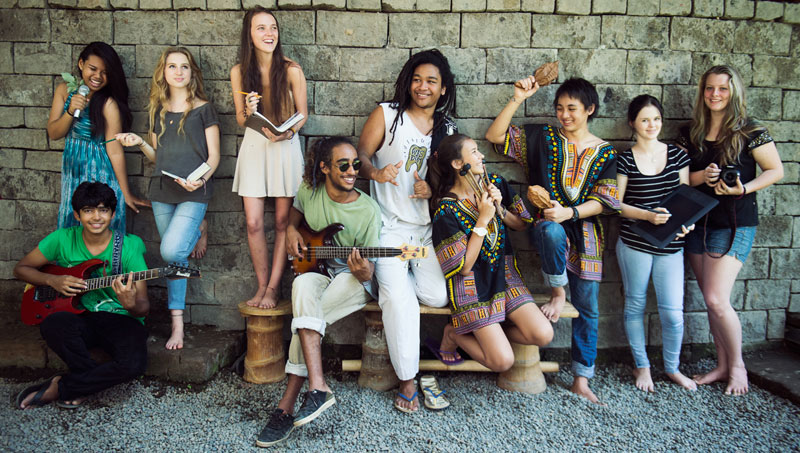 Our Marimba troupe stole the show at the recent Bali Spirit Festival, our school band won the island’s battle of the bands for a second year in a row, our new school bloggers are influencing the powers that be at Harvard University and one of our best musicians has been accepted into two of the top universities in the world.

On the cusp of their graduation, Bamboo News gathered a few of its high school students and asked what has been going on for them at Green School and why the school’s successes in 2014 have soared to a whole new level.

First in our photo line-up is Achyuth Jaigopal, whose academic and musical talents have led to the offer of a place at one of the best music colleges in the world, Berklee College Of Music in Boston Massachusetts.

Spoiled for choice, he is tossing up as to whether he will take a path in music or follow his Indian parent’s into a career in architecture. He has also been invited to take up a university position at The Southern California Institute of Architecture.

Achyuth performing at Battle Of The Bands Competition

While at Green School Achyuth has left no opportunity unexplored. He came to the school as one of our “Greenest Student On Earth” Scholars and has since become well known on the island as the lead guitarist in Nasi Campur (made up of past and present Green School students). He frequently contributes to the school’s new blog site, Tulisan and according to Green School art Teacher, Jen Buchanan’s, he one of her most dedicated students.

If he’d remained in India, Achyuth is unsure he’d have made the grade to get into such great colleges.

“The stress of constantly studying to get the marks needed would have been so overbearing and taken all my time,” he says.

In Green School, there was a really good music program and it has “enabled me to expand my musical ability because of all the different cultures and people of different backgrounds.”

His time with Nasi Campur has seen him perform all over the island and even taken him to India to perform in the One Billion Rising Festival.

When Achyuth discovered a visual arts portfolio would be a large part of his entry requirement into college, he was in the art studio every day for 6 weeks, surprising even himself with the quality of his work, says Ibu Jen.

“That’s the thing about the Green School curriculum, there are no boxes to tick as to how and what we teach,” says Ibu Jen.

The High School classes are a unique 6 week program and this year the students have covered topics such as animation, stone sculpture, ceramics, printmaking, painting and digital media. Check out Green School’s Bamboo Gallery

Stop Motion Animation is one of the units offered by the High School Art Program.

“I call it slow art, or a kind of inside out teaching,” she says.

Having said that, the curriculum that has evolved at the school is very much influenced by our geographical location and the very rich cultural and artistic features that are part of living in Bali.”

There is no question, Green School’s unique physical structure has opened him up to the possibilities of cutting edge architecture.

Alicia Annisa, is one of Green School’s, local scholars and has been at the school for four years. She is the lead singer in Dusty Pencil, the Green School band won first place in the island’s High School Battle Of The Bands. She says Green School has provided her with an education that combines all her passions. She has also written many songs as a solo singer.

When Green School music and drama teacher, Sarita Pockell, introduced Tulisan, a new student blog magazine to the school she had no idea her daughter, Shanti Balam Belaustegui Pockell, would take so enthusiastically to the genre.

Tulisan, which means “writing” in Bahasa Indonesian or “making your mark”, began when Harvard professor, innovator and musician, John Kao, approached Green School High School students last year hoping we would participate in Edgemakers – his initiative to link students from around the world in the discussion of ideas.

The high school did not have a student run publication and, as a result of discussions with John, it was decided Tulisan could help Edgemakers start the conversation. The blog magazine would create content and give Green School’s students a voice within its very public social media presence.

The group met every day for 10 weeks to design the magazine, create, post and analyse their blogs. They were then mentored by Edgemakers about the role of social media and self-promotion.

“It has been incredible to watch the students find their voice, and especially on a recent school theatre trip to Chennai, Auroville, and Pondicherry in India,” says Ibu Sarita.

For Shanti, who has grown up in and around the world of photo-journalism, “blogging has inspired me to continue with my other writing.”

“It’s been very motivating for me,” she says.

Becca Stine, whose father is travel writer, says the blog has given her “an excuse to go out and capture the weird and different interesting things that make Bali so unique,” she says.

Jessye Carmi got the gong as best base guitarist among all those competing in The Bali High School Battle Of The Bands and for him Green School has allowed him to “expand his playing and increase his musical output.”

Jessye, the best base player at the Bali High School Battle of The Bands

Jessye is of African American background and has grown up in Ubud around music. Playing alongside the school’s Marimba band has enabled him express his sense of rhythm to create world music of all types, he says.

Jan Marraire, Green School’s specialist Marimba teacher, is proud of the way the school’s marimba program has become an integral part of the musical curriculum.

The style of learning involved in playing the Afro-marimba encapsulates the modes essential to African music. These modes have traditionally been undervalued in Western pedagogy, says Ibu Jan.

“Originally it was just a class that we all took, but as I started to play the music I realized I really enjoyed it and being able to practice and perform with a whole group is also a really great experience,” she says

“It would be cool to create some songs of my own or for other people to invent their own creation on the marimba as it is a beautiful instrument,” says Tya.

The Marimba has been a catalyst for the Green School community to cross over and become proficient in the Balinese Gamelan enabling them to pay along side the local community at ceremonies such as Saraswati Day
Saraswati Gamelan.

India Scarlett, whose photography illustrates much of Bamboo News, says her art has become a large part of her life due to the freedom she has had to experiment at Green School.

“I have now started developing my own personal style that will help me mold a career for myself when I have finished school,” says India.

A personal view of a Balinese woman by India

“Most people don’t quite grasp the idea of digital art, but Green School has been very supportive and accommodating helping me build the required portfolio, and in my final year I’ll be able to focus a great deal on it,” says Radha.

Eddy Said has been at Green School for five years and is looking forward to a career in retail, having built up a successful tee-shirt business over the past couple of years.

“Green School gave me the freedom to choose my medium and inspiration and support from a whole range of different people to develop outside of school,” says Eddy.

“It has just given me the confidence that everything will be okay.”