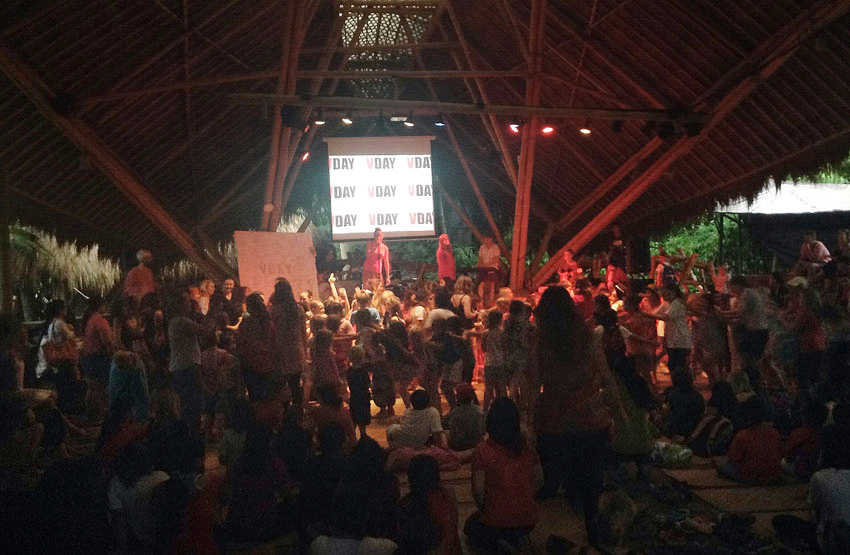 How lucky was I to be part of the movement to make change that is known as V DAY?

V Day is a global movement aimed at ending violence against women. We were lucky enough to  take part in a RRI Radio Interview in which we discussed Valentine’s Day, Green School and the concept of V-Day as a movement to make change.  I was extremely nervous, since the whole island was hearing this interview. It was an awesome experience.

Ibu Emily, Pak Tom, and Ibu Jen had worked tirelessly with the grade eleven class each Wednesday to study and prepare for this event so it was great once February 12 (the last school day before Feb 14) finally came around.

The next day, the 11th grade service class, had the opportunity to visit the courthouses in Denpasar.

Putu Anggreni, a lawyer who actively works with APIK (The Women’s Legal Aid Organization Association for Justice in Bali) introduced us to a judge, who deals with domestic violence cases in Bali.

The class was delighted to hear that she planned to host a V Day workshop at Green School, as well as speak at our assembly.

The themes were differentiated by grade level: Love and Friendship (Primary) and Violence Against Women (Middle/High School, Faculty/Staff).

Poems were judged by a High School student panel (from Student Council and/or VDay Committee) along with Ibu Emily and Pak Tom.

All the submissions were awesome!! But we’d like to give a special shout out to the winners:
Tenzin Botha (3A), Belle (4B), Amber (5A), Melati (Grade 8), Isabella (Grade 11) and Ibu Jen (Art).
Everyone’s poems are featured on our ‘VDay Voices’ wall.

On February 12th Soul Surf Project come and lead a workshop on the work they do to help children in Bali.

High school students Erinn, Cazmir, Becca, and Shanti, along with Ibu Nicola, led a Sex Education workshop for their middle school buddies. Ibu Jackie Pye led two workshops on the power of language as it relates to violence against sexuality and gender. Grade 11 student, Isabella Leary, led a workshop on Rape Culture. Ibu Nikki led a popular workshop on the representations of women in pornography and their real-world implications. Our amazing guests from APIK, including Ibu Anggreni, spoke to a group about the issue of polygamy in Indonesia and its impact on women. Ibu Sarita, Pak Tom, Ibu Tini, Ibu Jen, and some of our high school students led workshops for our little buddies in primary that explored VDay concepts through art, song, stories and play.

A huge thank you to everyone who made these workshops so special!

The event culminated in a vibrant student-led assembly. The assembly started with a subtle heartbeat, which according to one parent, “silently captured the gravity of the seriousness of the subject discussed”. This was shortly followed by a “gripping, passionate, on-point” poetry performance, which solidified the subject matter.

A short introductory video followed, along with an opening speech by my fellow classmate, Elle O’Brien, and myself to properly introduce the assembly with expressions of gratitude. After another short video, Ibu Putu Anggreni led a short, but inspiring presentation and speech.

In the speech, Ibu Anggreni spoke about her cause and the various ways she helps women and children in Bali, including communication and collaboration with authority figures to spread awareness in order to finally end violence against women.

After a short interlude, Ibu Sarita, our beloved drama teacher, led the newly arrived primary students in a charming and adorable sing-along, which teaches young children to respect personal boundaries as well the importance of the word: “No” when it comes to bodies and physical contact.

After short performances by our primary poetry contest winners, two members of the V Day committee, Anastasia Komarenko and Manix Wolan, led a passionate, chilling, climactic speech, which concluded with the globally recognized “One Billion Rising” hand sign, quickly observed by every member in the Sangkep.

The assembly concluded with a fun-loving cover of “RESPECT,” performed by our high school band, followed by a dance party.

I fully enjoyed the experiences of V Day and all of its fascinating events. I am truly looking forward to participating in this event once again at Green School next year.