Dita Anggraini: A Love for Nature and Technology 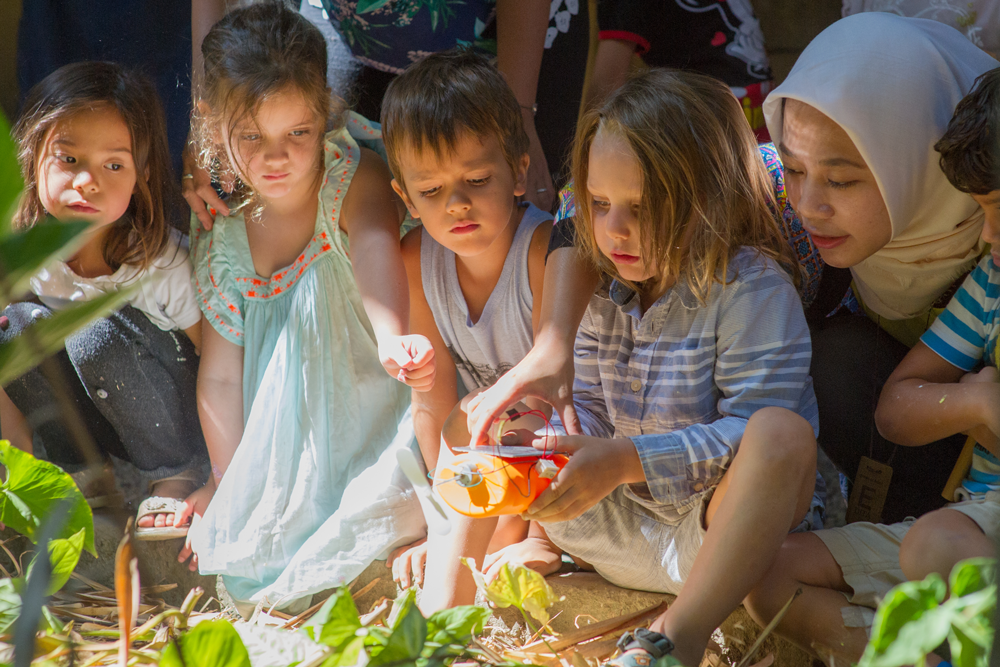 Dita joined Green School in 2017 as part of the Innovation Hub. Without her, many electrical projects on campus simply would not have happened. She has been instrumental over the past 3 years helping to install and maintain 4 renewable energy systems on campus that have brought Green School Bali close and sometimes to 100% powered by renewables.

Most notably, this year Dita took on the role of Robotics Coordinator, and has since launched classes in Primary, Middle and High School with several teachers to lead students through the basics of electronics and robotics.

All of this combined equals one person, Dita, who continually amazes everyone she works with because of her dedication and persistence and interest in all things electronics and projects while teaching students the importance of these topics. Here is her story.

For as long as she could remember, Dita Anggraini loved math and science. But growing up in a small village in Indonesia, Dita was often told that there was little use for her to study, that her role as a girl was helping her mother at home, and as a woman, it was by the side of her husband, raising children. Her family found her aspirations bewildering. But the discouragement Dita faced did not dampen her passions.

“As I grew older, I realized that technology is the key to civilization but around the world, natural resources are exploited in the pursuit of technology. I came to believe that science in the hands of someone with love for nature can solve problems communities face, without destroying the environment,” Dita recalls.

Dita’s growing love for sustainability along with her passion for technology made her a misfit in an environment where women over centuries had taken on very traditional roles. Dita wanted to prove that women can excel at anything, even male-dominated fields like engineering. She enrolled in an engineering program at Gadjah Mada University and in her final year, came across an opportunity for an internship at Bio Bus-a social enterprise that provides green transportation to the Green School Bali community. Her love for technology and nature found a home at the Green School and she began working with Operation Rain or Shine (OROS), the school’s biggest renewable energy project, while also completing her undergraduate thesis.

“When I joined Green School in 2017, there weren’t many STEM (science, technology, engineering, and mathematics) based courses. I wanted to use renewable energy and electronics, to show students and the larger community that technology and nature can complement each other,” she says. Upon Graduation, Dita took up the position of Project Management Associate at the Green School and became involved in many renewable energy and green building projects around the campus. “In just 18 months, we were able to take the school from 13% to 100% renewable,” she says.

Working with her colleague Daniel, she established the Project Centre as an accelerator for students’ projects, providing mentorship, micro-funding and connecting students with the right resources to accelerate project development. Since August 2019, Dita has been working at the Innovation Hub as a facilitator for electronics and robotics learning. “In this role, I am able to share my knowledge with students and the larger community through a variety of workshops and classes,” she says.

Riding her motorcycle to the Green School campus from North Denpasar every day, Dita’s days are busy. Each term, she facilitates a range of courses focused on coding, technical aspects of renewable energy, robotics, design-thinking, coral reefs and even puppet-making. And much of her work involves helping students turn their ideas into reality. “I never assume that I know more than my students, or I am smarter than them. A lot of times my students throw ideas at me that I could never think of. I believe that when teachers and students learn and grow together, it can lead to wonderful innovation”.

But Dita’s passion for fostering innovation and love for technology among young people is not limited to the Green School. Dita has also co-founded a non-profit social community called Cahya Abisatya Innovation Lab that works to raise awareness about the importance of Food-Energy-Water Nexus and support Indonesian youth in implementing their ideas through seed funding and mentorship. “Working at the Green School has encouraged me to pursue my dreams and inspired me to work towards empowering other Indonesian women. I dream of a world free from discrimination. A world that provides the same opportunity for everyone to grow. My mission is to support Indonesian women in pursuing higher education, especially in fields such as engineering,” she says.

This article is the first of our four-part International Women’s Day series, celebrating inspiring women of Green School.